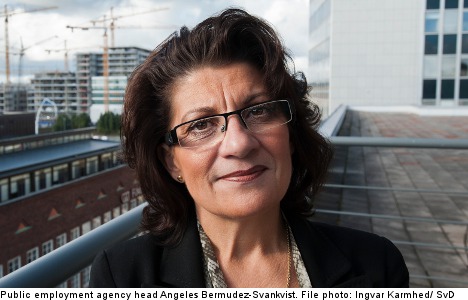 “They’re busy with the budget negotiations. If there is any change then we will let you know,” said Niklas Gillström, Press Secretary to the Minister for Employment Hillevi Engström.

The board of Sweden’s public employment agency (Arbetsförmedlingen) stated on Friday that it no longer has any confidence in Angeles Bermudez-Svankvist, who has led Sweden’s jobs agency for the past five years.

However the 50-year-old on Friday remained defiant, commenting on the vote of no confidence from the board that it “was business as usual”.

“It is a question for the government and not for the board whether I should remain in the post. Until I hear anything from the government I will stay, for sure.”

According to documents reviewed by the Aftonbladet newspaper, Bermudez-Svankvist managed to rack up more than 15,000 kronor per month in mobile phone data use charges on her work phone.

Between March 2012 and August 2013, a period which included more than a dozen trips abroad, Bermudez-Svankvist’s total mobile phone bill came to 311,000 kronor.

According to Swedish media reports on Saturday, further questions have emerged about excessive travel allowances claimed for work trips.

According to a report in the Dagens Nyheter daily, Bermudez-Svankvist’s family accompanied her abroad on at least four occasions, with two of these trips accounting for the massive phone bills.

The phone bills are thought to have arisen from data roaming fees.

The chair of the agency’s board, Christina Johansson, told the Expressen newspaper on Friday that the government had been informed of their concerns about Bermudez-Svankvist, saying the report about the sky-high phone bills was “one of several pieces of the puzzle”.

Last spring, ST, the Union of Civil Servants conducted a survey that found a great deal of discontent among the employment agency’s staff as well as frustration with leadership.

A dentist by trade, Bermudez-Svankvist has led the agency for the past five years, being named the public authority boss of the year in 2009 by Veckans Affärer magazine.

According to a review conducted by the Dagens Nyheter (DN) newspaper, she is among the highest paid agency heads appointed by the government, commanding a salary of 142,000 kronor per month.