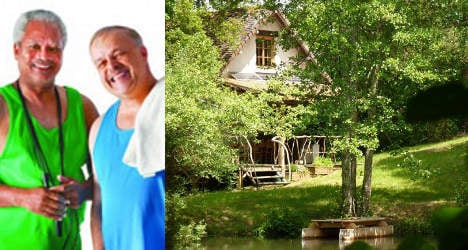 A couple relaxes in Briton Danny Silver's "gay village" near Narbonne. Right: The 'Poacher's Cabin,' rented by the Kirkwoods, from Essex, in the Dordogne. Photos: The Villages Group/Covert Cabin

Every summer, thousands of holidaymakers from all over the world flock to the south of France, and over the years even more have built or purchased their dream home in the beautiful countryside there.

And with thousands of French people and foreigners looking to spend their retirement or their ‘grandes vacances’ in the same sunny corner of France, the market for expat holiday homes, retirement villages, campsites or any other kind of lodgings has grown into a monster.

With established chains snapping up most of the business, it can become a tough market to penetrate, especially for expats.

Unless, that is, you have a bright idea.

For this week’s My French Career, The Local talks to two expats who had two simple but brilliant ideas and carved out a successful niche in this saturated market of holiday homes.

‘I honestly don’t know why, but I thought to myself – Gay.’

‘Le Village – Canale du Midi’ was described on the Villages Group's website as “a private oasis for the over-50’s Gay and Lesbian (LGBT) community who want an ‘active and healthy lifestyle’ in the warm, friendly and healthy climate of southern France.”

How did the plan for the ‘gay village’ first come about?

“First of all, let me emphasise that everyone is welcome at Canal du Midi,” Silver says of the development, which will start selling properties in September, and should open in February 2015.

“It will not be exclusively for gay people and in fact, quite a lot of the interest we’ve had has been from straight people who are intrigued by what they see as a community that looks exciting and different from the norm.”

“For about three years we had been trying to start up something in this for over-50s interested in active living, but when we advertised it in May, we didn’t get the response we had hoped for,” says Silver.

“I honestly don’t know why, but at that point I said to myself: ‘Gay.’ And without that new angle, the whole thing would undoubtedly have been dead in the water,” he says.

What problems had the original project been facing?

“Anywhere you go around the world, property developers will always tell you ‘Red tape is a nightmare,’ but honestly, I’ve never seen anything worse than the bureaucracy in France since Hollande’s government started a year ago.”

“Then there’s the planning permission process, which in France is completely backwards. You get the permits, and then the locals, especially the ‘green lobby,’ offer their complaints, when it’s too late to change your plan anyway.”

SEE ALSO: "Starting a business in France? Think it through"

Silver’s stroke of genius in marketing Le Village Canal du Midi to the gay community, however, appears to be paying off.

“Since August we’ve had around 20,000 hits on the website, hundreds of messages of support, possible investment from the US, and at least two other mayors who have asked me to bring the gay-friendly village to their town.”

“And when I was visiting the area recently, I talked to restaurant-owners, for example, who told me their business was down 30 percent this summer. They’re delighted to hear they might finally be getting some more customers,” Silver adds.

‘None of this was planned.’

Diane Kirkwood, who runs off-grid, “off-beat holiday rentals” at Covert Cabin in the Dordogne region with her husband Bob, tells The Local it was a combination of chance, circumstances and clever marketing that allowed their unique holiday homes to stand out from the crowd.

“After we bought a house here in 2001, we found a cabin on a lake nearby, and bought that too. Bob has always worked in joinery, so we renovated it ourselves.”

“Because there aren’t many jobs around here, but there are plenty of holiday-makers, we decided we might as well start renting out the cabin. None of this was planned from the beginning,” she adds.

“We promoted the cabin as ‘off-grid’ partly because at first we weren’t able to run electricity to it from the house,” admits Kirkwood, who is from Essex in England.

“Secondly, it was a real niche – something that we knew wouldn’t appeal to everyone, but would help us stand out.”

SEE ALSO: "There is nowhere better to live than the Dordogne"

“And at the time, there was a lot of buzz in the media about ‘eco-tourism’ and ‘eco-footprints’, so Bob and I thought we should promote the cabin to people who are interested in nature and the environment, and take advantage of how isolated the area is.”

“Since then, we were so inundated with interest that we added two more cabins, and have clients from everywhere who want an eco-friendly holiday, to go hiking and explore the woods and lakes, or just to get away from it all,” adds Kirkwood.

There are thousands of employment offers in France – a simple internet search for jobs d’été came up with numerous jobs boards offering work in France, while the government-backed Centre d’Information et de Documentation pour la Jeunesse (CIDJ) offers advice and information on all aspects of life for young people in France, including finding seasonal work and summer placements.

Sectors including agriculture, hospitality and tourism are always recruiting in the summer, seeking fruit-pickers, holiday camp workers and serving/hotel staff.

But what are the rules for people seeking summer jobs?

READ ALSO Vendange: What you really sign up for when you agree to help with the French wine harvest

Children from the age of 16 (under certain circumstances, the age limit drops to 14) who are legally resident in France can work as long as they have written authorisation from their parents or legal guardians. A model authorisation letter is available here.

Those under the age of 18 cannot undertake certain jobs for health and safety reasons.

In the following circumstances, children as young as 14 or 15 can work during school holidays.

Salary is usually paid monthly and will have a payslip. For those aged 18 and over, pay will be at least equal to the minimum wage.

Under 18s have certain additional protections:

Right to work in France

If you’re a French citizen or hold permanent residency in France then you have the right to work, but for foreigners there are extra restrictions.

Anyone who holds the passport of a EU/EEA country or Switzerland, is free to work in France or to travel to France seeking work without needing a visa or work permit.

Most other people will need permission to work in France – even if it’s only for a short period or for casual work such as grape-picking. Depending on your country of origin you may need a visa – everything you need to know about that is here.

In addition to the visa, you may also need a work permit, which is the responsibility of the employer.  To employ anyone in France for less than 90 days, an employer must get a temporary work permit – before the prospective employee applies for a short stay visa. This permit is then sent to the embassy at which the employee is applying for a visa.

If you come from countries including the UK, USA and Canada you can spend up to 90 days in France without a visa – but you may still need a work (convention d’accueil) if you want to work while you are here.

Certain countries have specific ‘seasonal worker’ visas on offer, for certain sectors which allows – for example – Canadians to come to France and work the ski season.

Certain sectors which have a lot of casual workers – for example seasonal fruit-picking – do have cash-in-hand jobs, known in France as marché noir (black market) or simply travail au black (working on the black, or working illegally).

This is of course illegal and working this way carries risks – as well as the possibility of losing your job if labour inspectors turn up you are also in a vulnerable position. If your employer suddenly decides not to pay you, or make unexpected deductions from your wages, there is very little you can do about it since you won’t have any kind of work contract.