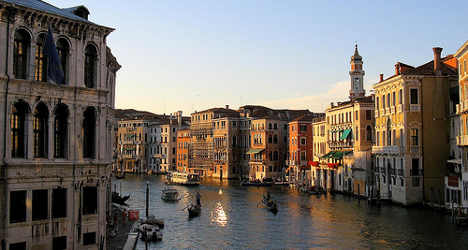 The tourist died in Venice on Saturday. Photo: HarshLight/Flickr

“In Rialto there are only two jetties for steamboats like 30 years ago, when there were three sailing routes, but now there are too many,” Aldo Reato, President of the Venice Gondola Rowers told Venezia Today. “It’s appropriate that only the most important waterbus routes pass, we can’t have a steamboat passing every minute.”

“We have reported this problem several times, there is too much traffic and transport goes too quickly. But no one listens to us.”

Around 40 gondolas sailed through the Grand Canal in silence on Sunday as a mark of respect for the 50-year-old German tourist who was killed following a collision between a gondola and a vaporetto waterbus on Venice’s Grand Canal. The man’s daughter was also badly injured.

The accident happened around mid-day on Saturday near the canal city's famous Rialto Bridge as the public transport waterbus manoeuvred toward a stop, Italy's Ansa news agency said.

The German man, identified as a criminal law professor from Munich, his wife and three children and the gondolier all fell into the water in the accident. Other gondoliers rushed to the rescue, taking them to the bank.

The waterbus reportedly crushed the German man, named as Joachim Reinhard Vogel, against the gondola.

His three-year-old daughter suffered a head injury and was taken to hospital in nearby Padua. Initial reports had said the injured girl was on the vaporetto.

"I am really sad after what has happened," said Venice mayor Giorgio Orsoni.

As a sign of mourning the 425 gondolas normally in service suspended their activity on Saturday.

Prosecutors have opened an inquiry into the causes of the accident, the news agency reported. Police questioned the gondolier and the pilot of the waterbus, and the two vessels were seized.