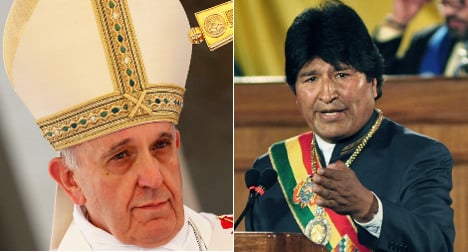 The news comes one day after the Latin American pope led celebrations for the Feast of the Assumption, a national holiday in Italy, and urged peace and reconciliation in Egypt.

This will be Morales’ second meeting with Jorge Mario Bergoglio after they met on July 28th for the National Day of Youth during the Pope’s visit to Brazil, his first foreign trip as pontiff.

In their upcoming talks, Morales and the pontiff are expected to tackle themes such as poverty and other social problems.

Judging from his highly successful trip to Brazil in July, the upcoming visit is likely to boost the Latin American pope’s international image even further.

Earlier in July, the pontiff was even elected 'Man of the Year' by the Italian edition of Vanity Fair, appearing on the society magazine’s front cover accompanied by the headline “Brave Pope Francis”. Later that month the Pope was even crowned "most influential Twitter leader" when his follower count topping 7 million with an average of 11,000 retweets per tweet.