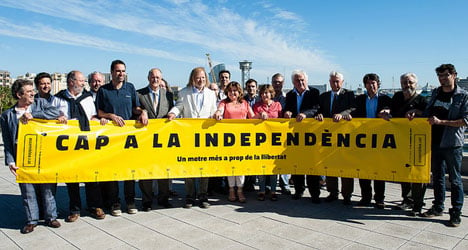 Organizers hope to draw international attention to the separatist cause via a human chain that spans the region. Photo: Flickr/Assemblea.cat

The 'Catalan Route to Independence' organized by the Catalan National Assembly (ANC) aims to draw international attention to the separatist cause.

It is based on a similar, successful human chain that took place in Estonia in 1989 to support the independence campaign in the Baltic states, according to Catalan daily La Vanguardia.

The Estonian organizers, who attracted 150,000 people to form a 215km line, have shared their experiences with the ANC.

One of the lessons learned was the need for practice chains. To that end, more than 100 smaller events have been held or are planned across Catalonia at local public celebrations and events, as well as by supporters in Brazil, the USA, Uruguay, Argentina, Toronto, Japan and Germany.

300,000 people, including many senior politicians, have already signed up to participate in the human chain on September 11th.

That date is better known locally as La Diada – the national day of Catalonia.

On the same day last year, more than one million people demonstrated on the streets of Barcelona in support of Catalan independence.