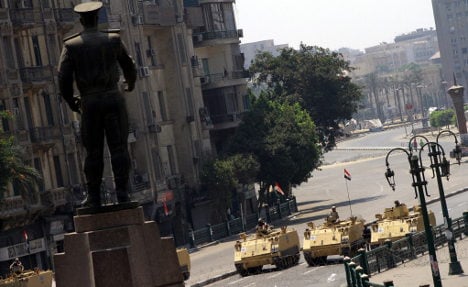 Merkel’s office released a statement saying that both leaders shared “deep concern and dismay about the high number of fatalities and injuries” and would continue to closely coordinate their response to the crisis in the north African country.

Egypt has faced international condemnation since around 600 people were killed in clashes on Wednesday when police broke up protest camps of supporters of ousted president Mohamed Morsi, in Egypt’s bloodiest day in decades.

Earlier on Friday the German government said it “condemned in the strongest terms” the bloodshed.

The foreign ministry meanwhile widened its travel alert from Cairo and parts of the Nile River Delta to all of Egypt – including the popular Red Sea tourist resorts – advising German citizens to stay away.

And big tour companies including TUI and Thomas Cook said they would scrap all trips until mid-September.

On the day Islamists staged “Friday of anger” marches, Merkel’s spokesman Steffen Seibert said: “We call on all sides, especially today, to act peacefully and refrain from any use of violence”, as well as a return to dialogue and an all-inclusive political process.”

Seibert also said reports of attacks on houses of worship, “greatly worry us,” after Coptic Christian churches were attacked in the mainly Muslim country.

Meanwhile Merkel, in pre-released excerpts of an interview with the Frankfurter Allgemeine Zeitung daily, said that “violence must under no circumstances be used as a solution to political problems”.

Along with the United States and other EU powers, she said: “We remain convinced that Egypt can only overcome the crisis in a peaceful political process that is open to all political forces and does not exclude any party.”

The chancellor pointed to EU help for Egypt and other Arab Spring countries, including with pro-democracy programmes, but added: “We can help the countries of the region, but only the societies themselves can choose the right path.”

German foreign ministry spokesman Andreas Peschke meanwhile advised Germans to refrain from any non-essential travel to the country, saying: “Travel is not recommended in the whole of Egypt.”

He suggested at least 10,000 Germans were currently in Egypt, mostly tourists.

Peschke also said Berlin supported the idea of all EU foreign ministers meeting on the Egypt crisis in the first half of next week, following a meeting Monday of 28 senior officials in charge of foreign policy and security.