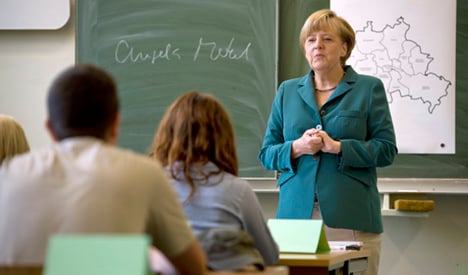 Merkel, who is leading in opinion polls ahead of next month’s general election, returned from a two-week holiday to sit in on the class of sixth formers in east Berlin.

In 2005 she became the first chancellor who grew up in the communist east and she shared with pupils a few memories of the day when the East German authorities closed the border.

“It was 1961, the same year I started school,” she said as she arrived at the Heinrich Schliemann secondary school in the now upscale district of Prenzlauer Berg. “My favourite subjects back then were languages, German and maths.”

Merkel, 59, visited at the invitation of a youth magazine and accepted bouquets of flowers from excited pupils, who posed for smart-phone pictures with the chancellor in front of the school.

Wearing a teal blazer, Merkel signed her name in chalk on the blackboard next to a map of Berlin before beginning her class.

It was her first public appearance since her summer break in the Tyrolean Alps with less than six weeks to go until the September 22nd vote, and apparently designed to capitalise on her enormous personal popularity.

Reporters were not granted access to the lecture but Merkel answered a few questions before speaking to students.

Merkel, who said she had never taught before and hadn’t been in a classroom in decades, swotted up on her Cold War history before giving the lesson.

“It’s quite a difference between having personal experiences and teaching facts,” said Merkel, a trained physicist.

She is to hit the campaign trail in earnest this week with a rally in the business capital Frankfurt on Wednesday.

Her main opponent, Peer Steinbrück of the Social Democrats, has seen his bid marred by gaffes and his party is trailing Merkel’s conservatives by about 16 points.

This month he angered many east Germans by saying Merkel lacked a “passion for Europe” because of her upbringing under communism.

He will speak on Saturday at Berlin’s Brandenburg Gate, the symbol of German unity after its long division.

On the morning of August 13th, 1961, East Berliners woke to find soldiers had blocked off the streets, cut off rail links and begun building a wall of barbed wire and cemented paving stones which over the years, in Berlin, grew in height and complexity over 155 kilometres (96 miles).

East German authorities sealed the border to the West to stem a mass exodus from the communist system.

At least 136 people are known to have died at the Wall before it fell in a bloodless revolution on November 9th, 1989.

Historians suggest that the overall figure of those killed while fleeing from all of East Germany stands at between 600 and 700 although victims’ groups say the number is higher still.