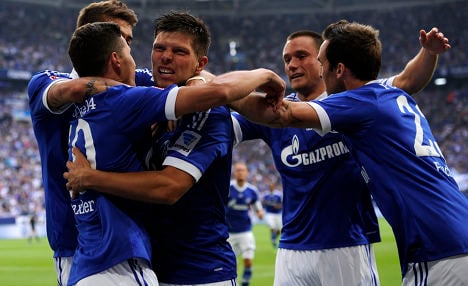 Champions Bayern Munich, who beat Mönchengladbach 3-1 on Friday, and Borussia Dortmund, who won 4-0 at Augsburg on Saturday, picked up impressive wins.

But there was bad news for Germany coach Joachim Löw as Schalke’s teenage midfielder Julian Draxler withdrew from Wednesday’s international friendly against Paraguay.

The 19-year-old attacking midfielder limped off after only 23 minutes against Hamburg having damaged his left Achilles tendon.

“The injury could quickly get inflamed and turn into a long drawn-out affair, so it makes no sense (for him to play on Wednesday),” said Schalke team manager Horst Heldt.

Striker Maximilian Beister produced a bullet header on 24 minutes to put Hamburg in front before Huntelaar levelled right at the end of the first half.

Ex-Dortmund defender Lasse Sobiech then headed the hosts ahead just after half-time before Hungary’s Szalai, who joined Schalke from Mainz in the summer, pounced on a mistake by Hamburg goalkeeper Rene Adler on 72 minutes for a share of the points.

Okazaki, who joined Mainz on July 1st in a three-year deal after two years at Stuttgart, slotted home his team’s second when he converted a cross from Czech Republic defender Zdenek Pospech before Müller made it 3-1, 12 minutes from time.

Stuttgart’s Martin Harnik gave his side hope with eight minutes left to make it 3-2, but Mainz hung on.

Aubameyang, 24, showed why Dortmund paid French League Cup winners St Etienne 13 million euros (US$17.3m) for him as he became the sixth player in Bundesliga history to hit three goals on his debut.

South Korea’s Son also netted on his first competitive appearance for Champions League hopefuls Bayer Leverkusen in their 3-1 win at home to Freiburg.

Hertha Berlin marked their return to the top-flight after a year’s absence with a stunning 6-1 rout of Eintracht Frankfurt.

Colombia striker Adrian Ramos and Tunisia forward Sami Allagui each scored twice in the hammering at Berlin’s Olympic Stadium while a first-half penalty from Eintracht Frankfurt midfielder Alex Meier was all the guests could muster.

Hanover 96 enjoyed a 2-0 win over Wolfsburg, who finished with nine men after both midfielder Maximilian Arnold and Swiss defender Timm Klose were sent off.

Hoffenheim were held to a 2-2 draw at home to Nuremberg while Werder Bremen edged newly-promoted Eintracht Braunschweig 1-0 with Austria midfielder Zlatko Junuzovic hitting the 82-minute winner.