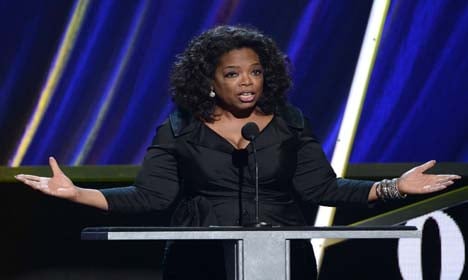 Winfrey, one of the richest women in the world, said she had been in Zurich for US singer Tina Turner's wedding in July and had spotted a swanky crocodile handbag while out shopping.

"I'm in a store, a name-brand store. I'm by myself, absolutely nobody else with me. And I say to the woman, 'I would like to see that bag on the shelf'," Winfrey told fellow US talk show host Larry King on Internet channel ora.tv.

"And she says, 'No, that one's too expensive. I'll show you this one'," said Winfrey.

She did not directly describe the incident as racist, but recounted it after telling King of a "racist moment" in New York years ago when she and her hairdresser were refused entry to a luxury store which had been robbed by two black people.

Trudie Goetz, head of the Swiss luxury chain Trois Pommes, denied her saleswoman had ever sought to stop Winfrey buying the bag.

"Everyone wants to sell a crocodile bag," Goetz told AFP.

"It's a misunderstanding," she said, adding that the saleswoman always put the customer first and tried to be "too kind".

"She explained how beautiful the bag was, then she said, 'Honestly this bag costs 35,000 Swiss francs, but I can show you other versions in ostrich, in pure leather and in velour'," Goetz said.

That sum is worth $38,000 — small change for Winfrey, whose wealth is estimated at $2.8 billion by Forbes magazine.

On its Twitter feed, Switzerland Tourism apologised and said the saleswoman had behaved inappropriately.

Winfrey joked that she had been tempted to buy up the entire store, recalling a scene in the movie "Pretty Woman" where Julia Roberts' prostitute character has the last laugh in a snobbish shop.

"I wanted to create a Pretty Woman moment and come back and buy everything and say, 'Big mistake!'. But then I thought she'd get a commission, to let's not do that," she told King.

Goetz said no disciplinary action was planned against the saleswoman.

"She's a great person. She's highly qualified. She also works in the shop in St Moritz and she takes care of prestigious clients," she said.

Trois Pommes was still considering how to respond to the claims, and would take legal advice, she added.

Winfrey, 59, was last month named the most powerful celebrity in the world by Forbes.