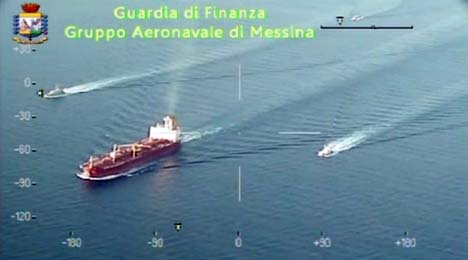 This picture shows the MV Salamis tanker (C) carrying 102 migrants rescued from a leaking dinghy arrives at Syracuse, in Sicily after being turned away by Malta. AFP Photo / Guardia di Finanza

"We were alerted just after 5:30 am (0330 GMT) that a boat had run aground across from a beach resort" near the island's second largest city Catania, said spokesman for the port authority Roberto D'Arrigo.

"Most of the migrants jumped into the water" when they saw the coastline, he said.

The bodies of two of the dead migrants were found on the beach while "four other bodies were recovered" by rescuers around the boat, as they apparently did not know how to swim and drowned, authorities said.

A three-year-old child suffering from dehydration and a pregnant woman have been hospitalized.

D'Arrigo said that all the passengers were young adults and one of the deceased was a teenager.

Most of the passengers were on the shore when authorities arrived at the scene, he said, indicating a total of "91 migrants, Syrians and Egyptians" had been saved and were currently being identified by authorities.

Earlier investigators had said the 18-metre-long (59-feet) boat was carrying around 120 people.

Dario Monteforte, owner of the Lido Verde which alerted authorities, told Sky TG24 television that he "saw a crowd of youths on the beach running toward the road".

Monteforte, visibly shaken, has closed his establishment for the weekend.

"Something has to be done. This is really an unending tragedy," he said of the plight of thousands of clandestine migrants in rickety boats who seek to reach Italian shores each year.

According to D'Arrigo, it was "totally unusual" for migrants to land on a beach in Catania as "normally they arrive further south in the region of Syracuse", or else at the extreme southern point of Sicily or the island of Lampedusa.

Another group of about 100 migrants, mostly Syrian families, were rescued overnight Wednesday off the coast of Calabria on the Italian mainland.

They had left Syria two weeks earlier and had to change boats several times before being left adrift aboard an 11-metre (35-foot) vessel.

The conflict in Syria has killed more than 100,000 people since it erupted in March 2011 and millions more have been displaced or fled the country, according to the United Nations.

Improved weather and calmer waters have seen a spike in boat people arrivals in Italy in recent days.

But shipwrecks are frequent because the boats are often old and overloaded.

Human traffickers regularly abandon their passengers when Italian or Maltese coastguards spot them.