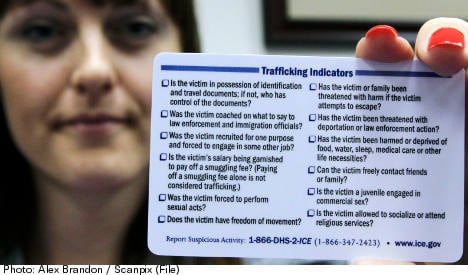 Spanish and French police said Saturday they have dismantled a human trafficking ring that smuggled Chinese migrants into Europe and the United States, charging up to 50,000 euros per person.

A total of 75 suspects including two "main operatives" based in Barcelona were arrested, including 51 in Spain and 24 in France after a two-year joint investigation, a police statement said.

The traffickers charged 40,000 to 50,000 euros ($53,000 to $66,000) per person to provide "false identities and transport Chinese citizens to the United States and countries such as Spain, France, Greece, Italy, the United Kingdom, Ireland and Turkey," the statement said.

In some cases the ring was involved in the sexual exploitation of migrants, it added.

The investigation into the ring, described as "complex", began in July 2011.

"The composition of this perfectly structured, hierarchical organisation, with its kingpin in China and independent cells operating in different countries, completely shut off from each other, complicated the investigation," the police statement said.

The traffickers accompanied their clients all the way from China to Spain, "the last stop (serving as a) trampoline to the final destination, usually the United Kingdom or the United States," it said.

The operatives, mainly from China and Malaysia, had the "complete confidence" of the ringleaders and were "thorough connaisseurs of the European airports and cities along the route of the transfers," the statement said.

Once their mission was accomplished they would return home immediately, "in order to make it more difficult to track them," police said.

Upon the migrants' arrival in Barcelona, operatives of the trafficking ring would meet them and take them to safe houses before they embarked on the next leg of their journey.

The route taken from China, as well as the travel documents used, "changed constantly according to the successes and failures of previous trips… or in order to prevent discovery of the traffickers," the statement said.

The migrants were given precise instructions on how to avoid detection at customs controls, for example by mixing in with a group of tourists.

The two top officials were arrested in Barcelona, while another 49 suspects were picked up in Spanish airports including those of Barcelona, Madrid, Malaga and Mallorca, plus another 24 in France.

The 81 fake passports were found in two lodgings owned by the ring in Barcelona.

There police also found equipment for forging documents including portable computers, scanners, around 20 fake customs stamps and an electronic magnifier.

Police also provided pictures of a firearm, cellphones and wads of cash, both euros and yuan, that were seized in the operation.