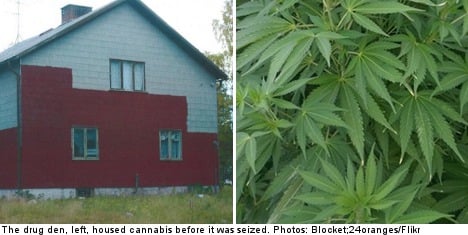 When police raided the home in Örträsk, Västerbotten, the district court ruled that the entire house should be seized, meaning the local police became the new owners of the property.

The house had been used to cultivate and then sell marijuana plants, which were also seized by the authorities.

With apparently no need for the five-bedroom house, officers decided to write up an advertisement on popular buy-sell site Blocket. The ad, which they make no mention of the previous owners, reads unlike a typical real estate ad and lists every fault of the accommodation, including water damages, stained floors, and internal damages.

Police admitted that the interest for the house has been low.

“The property should be carefully examined before a purchase is carried out. Come to the opening if you are considering buying,” the announcement reads.

The police decision to use Blocket has raised eyebrows among the officers’ colleagues.

“I’ve never heard of anything like it,” police lawyer Erik Lindström told the Folkbladet newspaper.

Blocket, which is similar to eBay, is Sweden’s largest buy-sell site and the third most visited website in the country.

A demonstrator smokes a joint at the pro-cannabis Hanfparade in Berlin in August 2021. Photo: picture alliance/dpa | Annette Riedl

The Social Democrats (SPD), Greens and the pro-business Free Democrats (FDP) are set to engage in coalition talks in a bid to become the next German government.  And the future of cannabis will likely be one of the topics to be thrashed out.

In drug policy, the three parties are not too far apart in their positions. So it’s possible that the drug could be decriminalised.

However, nothing is set in stone and the parties still haven’t come to a common line on the question of where and to what extent cannabis could be accessed.

The leader of the Liberal FDP, Christian Lindner, has now come out in favour of allowing cannabis products such as hashish to be sold in a controlled manner.

Consumers should be allowed “to purchase a quantity for their own use, for example, in a pharmacy after health education,” Lindner told a live broadcast on German daily Bild on Sunday.

Lindner said he was sceptical about the sale in “coffee shops” according to the Dutch model. “I am in favour of controlled distribution, and therefore health education must be able to take place,” he said.

People in the Netherlands can access cannabis products in coffee shops under the country’s tolerant drugs policy. However coffee shops have to follow certain strict conditions. For instance they are not allowed to sell large quantities to an individual.

Lindner said his main aims were about “crime and health prevention” and not with “legalising a right to intoxication”.

It’s not clear if Lindner advocates for prescription-only cannabis for medical use, or an over-the-counter model.

The FDP previously said that they they are in favour of the creation of licensed shops. Their manifesto highlights the health benefits, tax windfalls and reallocation of police resources that legalisation would create.

The Green party also want licensed shops, as well as a whole new approach to drug control starting with the controlled legalisation of marijuana. The Greens state that “strict youth and user protection” would be the centre point of their legislation and hope to “pull the rug from under the black market”.

The SPD also want a reform of Germany’s prohibition stance – but are more cautious than the smaller parties on the legalisation aspect. They would like to initially set up pilot projects.

READ ALSO: Why Germany could be on the brink of legalising cannabis

So far, the sale of cannabis is officially banned in Germany. Possession of cannabis is also currently illegal across the entire country. Those caught carrying the substance can face anything from a fine to five years in jail.

However, the justice system generally looks away if you are caught carry small quantities for personal use unless you have a previous conviction.

The definition of personal use differs from state to state, with Berlin having the most liberal rules and Bavaria the tightest.

It is estimated that around four million people regularly use cannabis in Germany.

Representatives of police unions in Germany have warned against legalisation. They argue that cannabis is an often trivialised drug that can lead to considerable health problems and social conflicts, especially among young people.

Oliver Malchow, from the GdP police union, said that “it doesn’t make any sense to legalise another dangerous drug on top of alcohol”.

The current Ministry of Health also continues to oppose the legalisation of cannabis, a spokesperson for Minister Jens Spahn (CDU) made clear. Cannabis is a dangerous substance and therefore legalisation is not advisable, the spokesman said.