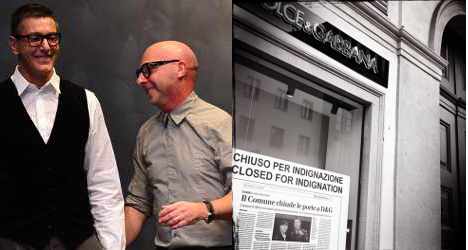 “We are not resigned to being crucified like thieves. Because we are not,” Gabbana told Italian daily Corriere della Sera.

The Italian designers caused controversy on Friday when they closed their nine D&G stores in Milan, with posters reading “closed for indignation” in the windows.

Dolce and Gabbana said that they had been mistreated by the city after being found guilty of tax evasion in June. The pair are appealing the verdict, which carries a sentence of one year and eight months in prison and a €500,000 fine.

“How can we accept being branded as tax evaders? We are decent people. We live in Italy, pay tax in Italy, we don’t pretend to live abroad,” Gabbana told Corriere.

“We only want to live a calm life and make clothes. Full stop,” he added.

Dolce said the decision to close the boutiques was taken as they could no longer keep quiet about their treatment since the conviction.

The designers are however open to dialogue with the authorities and will meet the mayor of Milan, Giuliano Pisapia, on Wednesday.

Discussion with Pisapia may help reinstate D&G as a pillar of the Milan fashion scene, although the designers say they will leave the city if their conviction is upheld in court.

“We will close. We will not be able to resist. It’s impossible,” Dolce said.