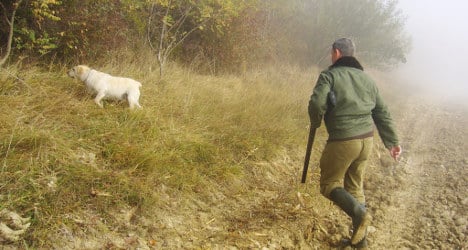 Hunting in France, has been a popular national sport for centuries, but some organisations say hunters and hunts now need to be strictly regulated after a new study revealed it was becoming more dangerous than ever to practice "la chasse", as it is known in French.

The increased risk is not down to the emergence of wolves in the east of France or bears in the Pyrenées but to fellow hunters, who have caused a dramatic increase in the number of accidents, some of which have been fatal.

According to a survey carried out by France's National Office of Hunting and Wildlife (ONCFS) which publishes annual data on the sport, there have been a total of 180 hunting accidents on French soil during the last season, held between August 2012 and February 2013.

This shows a sharp increase of 25 percent compared with the previous season when there were 143 accidents.

In 86 percent of cases, the victims were hunters or hunting guides, the survey said. Of the 21 deaths, two were non-hunters.

And an incredible one third of the accidents were self-inflicted, suggesting hunters may be their own worst enemy, especially in hunts for large game, primarily wild boar.

“We’ve never seen such an increase,” Pierre Athanaze from the Association for the Protection of Wild Animals (ASPAS) told AFP.

“We need regulations that allow us to supervise hunting safety and the practice should be stopped on Sundays because half of accidents take place on that day,” he added, pointing out that France is the only European country where hunting is practised every day of the week.

He also suggested that the leaders of hunts should be held legally responsible for accidents.

France is no stranger to hunting accidents, some of them freakish, some of which have made headlines in recent months (see below).

In December 2012, a nine-year-old boy was seriously injured after being shot in a hunting accident in Mouchin, a rural community in the north of France near Lille.

More recently in January a French motorist was killed in what appeared to be a freakish hunting accident in the Oise department of northern France. The accident occurred when a bullet apparently fired by a hunter ricocheted off a wild boar, before travelling almost 2km across fields, through the driver’s window and eventually striking the driver in the head.