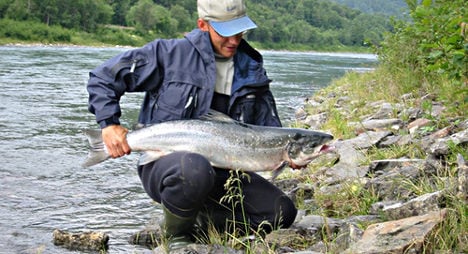 The Environment Agency (Miljødirektoratet) announced on Thursday that they were placing limits on salmon fishing in Nordmøre, the Trondheims Fjord, Nord-Troms andVest-Finnmark, a move welcomed by the organization Norwegian Salmon Rivers (Norske Lakseelver), which sounded the alert this week about precariously low salmon stocks.

"We hope this will be extended to upcoming fishing seasons, and that there will be a future demand to officially report catches of salmon in the sea as well as in the rivers," Norske Lakseelver spokesman Torfinn Evensen told the NTB news agency. "When fish stocks are down 60 percent in a year, we're on the brink. It's very serious," Evensen told the media earlier this week when his organization released its new estimates on salmon stocks.

"We are especially concerned about the situation in the Trondheim Fjord," said Environment Agency spokeswoman Heidi Hansen in a statement.

The ban aims to allow enough fish to survive in order to reproduce, and will be enforced from Friday July 26th in areas deemed key thourough-fares for the fish migrating upstream. Certain fishing areas where the official season runs until August 15th and 30th could also see the licence period cut back by two weeks.

In the rivers Gaula, Orkla and Stjørdals, members report that salmon stocks are 30 to 60 percent lower than in a normal year.