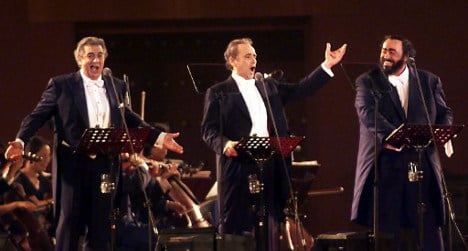 Plácido Domingo (left) was one of The Three Tenors along with fellow Spaniard José Carreras (centre) and the late Luciano Pavarotti. File photo: Stephen Shaver/AFP

The 72-year-old, popularly known for his "Three Tenors" performances with José Carreras and the late Luciano Pavarotti, was admitted to hospital in the Spanish capital on Monday and treated for a pulmonary embolism.

"I am lucky to be feeling very well. What hurts me the most is not to be able to sing in front of Madrid audiences," said Domingo, who was forced to cancel a string of performances.

"The doctor asked me to rest between three and four weeks," he told reporters at Madrid's opera house.

Domingo's doctor said that the star was expected to make a full recovery and resume singing.

"He will be able to recover completely and will not be constrained in his artistic and professional activities," said Carlos Gonzalez, who appeared with the tenor.

Domingo's agent had earlier in the week said that the embolism was caused by deep vein thrombosis — a condition in which a clot forms in a deep vein, often in a leg.

The Grammy-winning singer had to cancel five performances in Daniel Catan's opera "Il Postino", due to begin at the Teatro Real in Madrid on Wednesday.

He also bowed out of a concert he was due to conduct on Madrid's Plaza Mayor square on July 21st, the agent said.

On Sunday he said there was a "large probability" that he would have to cancel performances at the Salzburg festival on August 6th, 10th, and 13th.

Born in Madrid, Domingo moved to Mexico as a child with his parents, who ran a company that performed zarzuela, the traditional Spanish operetta form.

His repertoire encompasses 140 stage roles — a number unmatched by any other celebrated tenor in history.

File photo of Placido Domingo performing during the dress rehearsal of "Spanish Night" at the 150th Choregie in Orange, , July 2019. Photo: AFP

“I feel it is my moral duty to announce to you that I have tested positive for COVID-19, the coronavirus,” the 79-year-old wrote on his Facebook page.

“My family and I are all in self isolation for as long as it is deemed medically necessary. Currently we are all in good health but I experienced fever and cough symptoms therefore deciding to get tested and the result came back positive.”

He encouraged his followers to wash their hands regularly, keep their distance from one another and follow the advice of experts before ending his statement with a word of encouragement.

“Together we can fight this virus and stop the current worldwide crisis, so we can hopefully return to our normal daily lives very soon,” he said.

The Spanish icon, who won worldwide acclaim in the 1990s as one of the Three Tenors alongside Jose Carreras and Luciano Pavarotti, has since August been engulfed in a sexual harassment scandal.

He is accused of forcibly kissing, grabbing and fondling women over a period of more than 30 years.