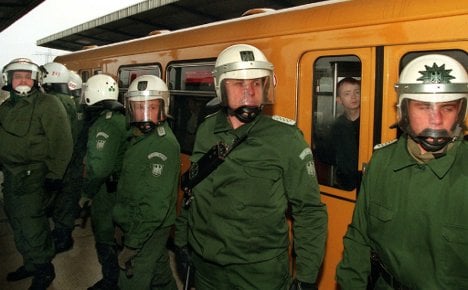 Last week’s report by the German Institute for Human Rights left no doubt as to its views on racism in the police force. Rules which allow police to stop and search people on the basis of their appearance are not only against EU law, said the institute, but “compromise human dignity.”

In the aftermath of the report, journalist Darnbach wrote that Germany must stop feeling offended and come to terms with persistent institutionalised racism:

The human rights agency has thrown light once again on to a dark corner of political culture, which is the persistence of racism in the actions of the state.

The institute examined the Federal Police Act – which regulates the force’s remit and actions – and established that at least one paragraph illegally allows police to observe and watch people on the basis of their appearance. It is only a couple of words in a whole law. But it is illustrative.

It can be controversial to accuse a democratic country of racism, especially Germany of all countries. Not least because the wording of the law in question looks so harmless: In the text it only says that officers should rely on their “experience” – or rather their gut feeling.

No police officer is explicitly told that they should concentrate on stopping and searching black people. But that appears to have been the result.

German officialdom always likes to see itself as the model pupil of its own history, the story of how murderous race hate ended in genocide. To admit that even seventy years later the country is not completely finished with that process means that perhaps we have not learned our lessons quite as properly as we should have.

But why? If we were talking about another issue, nobody would deny that even democracies which, on the whole, function very well are not immune to unsavoury developments more characteristic of dictatorships. The lively global debate about the USA’s spying program proves exactly that point.

But perhaps it is equality – always brutally destroyed by racism – which is so fundamentally a democratic principle, but one that democrats find can hardly bear being presented with the glaring reality so far from the ideal.

That’s what happens with racism, even more so when it’s not individual racism that’s the issue, but official, “institutional” racism on the state’s account.

Those who do not want to put a name to abuses are certainly not able to remedy them. The NSU murders could have almost certainly been prevented if racist bias by the investigating authorities hadn’t prevented racism from being recognised as the motive.

Instead racism continues to be routinely trivialised, even though it’s a danger for the whole society. And it weighs down on the lives of individuals: people who have to explain to their children why they are always asked to show their IDs, or why they cannot get a flat because of their skin colour or why they are always pulled off the train in full view of everyone.

Racism may be a serious accusation. But it’s much worse to do nothing about it.

This commentary was published with the kind permission of Tagesspiegel, where it originally appeared in German. Translation by The Local.