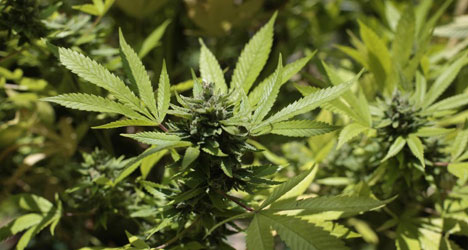 Holy smoke: the church was unaware that the man, who had permission to use the land, was growing marijuana. Photo: Desiree Martin/AFP

The 27-year old, identified only by the initials R.C.H., was placed under arrest on Friday night after a long surveillance operation by the island's police.

Agents kicked off their stake-out after locals in the heart of the island's Anaga mountains dialled in a number of anonymous tip-offs in June.

Investigating officials then discovered marijuana plants growing in a hidden plot of land formerly used as a vegetable garden.

The crop was shielded from view by plastic sheets over a wooden frame.

A man was then arrested while watering the plants and he later confessed to owning them, according to Tenerife daily Diario de Avisos.

Local police confirmed that the land was part of the diocese of the bishop of Tenerife, assigned to the parish of Our Lady of the Snows of Taganna.

The dope grower had a written agreement to cultivate the land, dated from the 1st April 2012, but such use is not thought to include the cultivation of psychoactive plants.

Regional president Ángel Víctor Torres announced the “tough measures” late Wednesday and said the island would be close off to all but essential travel from Friday at midnight.

He said that for a period of two weeks, travel between municipalities on the island should be avoided, that  social gatherings would be limited to six people from a maximum of two households, and the curfew would be brought forward to 10pm.

But while the decision appeared to derail the plans of thousands of holidaymakers who have booked to travel to the island for some winter sun over Christmas, a clarification came from the island’s Health Ministry explaining that tourists were exempt from the ban.

Those already on the island will be allowed to stay on and return home as planned, while new arrivals, both from mainland Spain or elsewhere, will be welcome if they have proof of accommodation booked and a negative Covid-19 test taken within the previous 72 hours.

A spokesperson from Jet2 which is operating holidays to the island said:

“We are aware of news reports regarding Tenerife closing its borders to holidaymakers. We can assure customers that we have received confirmation from the Canaries Government that this is not the case.  Holidaymakers can still travel to Tenerife to enjoy Christmas and their well-deserved holidays in the sunshine.

“Given this welcome update from the Canaries Government, alongside the current FCDO travel advice, we are operating our flights and holidays programmes to Tenerife as normal.”

The cumulative incidence rate over 14 days on Tenerife has soared to 226 cases per 100,000 people from 137 cases a month ago, above the average across Spain which just topped 200.