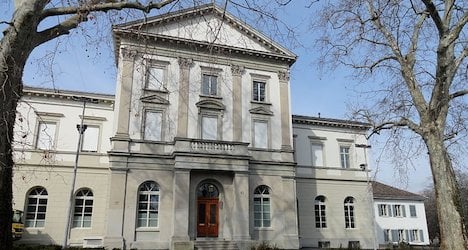 The decision marked a third, more severe sentencing of the man, convicted for an offence dating back to February 2009.

Doubting he was the biological father of his partner’s child, he took his anger out on the three-week old tot in a fit of jealousy, the SDA news agency reported.

When his partner was away from the home, he intentionally gave the baby scalding hot milk, which burned her mouth.

When the tot screamed he mauled her to the point where several ribs broke and grabbed the baby's arms so hard that he fractured her bones, SDA reported.

He once strangled the child until it went blue, according to the evidence.

It was only a happy circumstance that the girl (who is now four and a half) did not die, according to Switzerland’s supreme court.

The man was sentenced in February 2012 to 11 years in jail for attempted murder following an appeal of an earlier decision for an eight-year term.

But the country’s top court in March ordered a new sentencing in the case, arguing that the charge should be attempted premeditated murder.

Edward Snowden speaking via satellite as he received the Bjornson prize in September. Photo: Svein Ove Ekornesvåg / NTB scanpix
Just as was the case in an original lawsuit and the subsequent appeal to a lower court in Oslo, the supreme court said it could not evaluate an extradition request preemptively.
Former US National Security Agency (NSA) contractor, Snowden, who lives in exile in Russia, faces charges of espionage and theft of state secrets in his homeland that could land him up to 30 years in jail.
It's a further blow for the 33-year-old US citizen and his supporters at the Norwegian branch of the PEN Club who hoped he would be able to pick up the Ossietzky prize, which celebrates “outstanding efforts for freedom of expression.”
Norway was one of the countries where Snowden sought asylum after fleeing the United States in 2013, but Oslo's response was that asylum seekers had to be physically present in the country to apply.
Considered a whistleblower by some and a traitor by others, Snowden won a similar Norwegian award in 2015, but was likewise unable to collect it.
Snowden has also been nominated for the Nobel Peace Prize, which is also awarded in Norway, for the last three years, although without winning it.
Url copied to clipboard!