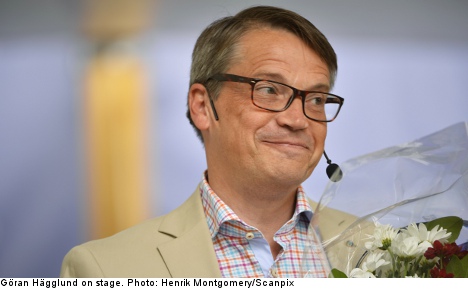 Almedalen is a week-long political event that has taken place since 1968 in the town of Visby, off Sweden’s east coast on the island of Gotland. Throughout the week, hundreds of lobbyists and politicians will be on hand to hold talks and host a total of 2,250 events, up from 1,800 last year.

On Sunday night, the Christian Democrats were randomly selected as the first of the eight parties to hold the floor for the evening, and party leader Göran Hägglund took the stage.

He proposed an improvement of the Swedish daycare system by decreasing the number of children in each class. The proposal, which would apply only to the youngest of children getting the schooling, would cost 1.4 billion kronor ($209 million) to implement, a fee to be funded by increasing the taxes of Swedes who earn over 45,000 kronor a month.

“We know that children feel the best in small groups. But we’re seeing a development that where the groups get bigger, it’s bad for the staff and the children,” he said.

Hägglund’s speech also turned heads when he brought in a touch of humour to take a dig at the opposition party, giving a lengthy comparison between their policy approach and a game of cards.

Almedalen, an event which became a Swedish tradition after the country’s former prime minister Olof Palme held an impromptu speech on the island, will continue until next Sunday, when the Social Democrats will take the stage on the final night.