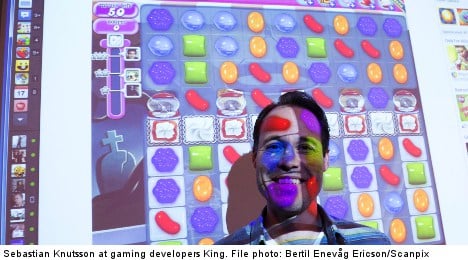 King by name, king by nature. It’s the Swedish company that has taken the gaming world by storm and is quite literally (candy) crushing the opposition.

Chances are you’ve seen the advert or at least played a few levels of one of King’s hit games, which include Candy Crush and Pet Rescue Saga. They have almost 200 million monthly players, knocked Angry Birds off the number one slot and, what’s more, this success story has its origins in Stockholm.

“The company has been around for ten years and all the founders are Swedish except for one who is Italian,” Daniel Persson, Game Director for King in Malmö, tells The Local.

“In the past year, growth has been remarkable due to the success of Candy Crush. It’s become a phenomenon that none of us could have expected.”

Ah yes, Candy Crush, the game that has truly put King on the map and been the cause of lots of family disputes over who gets to play with the iPad. King’s statistics are impressive: 190 million monthly players including social and mobile platforms and King.com generating 26 billion game plays per month.

With nine offices around the world and a staff of approximately 450 the recent expansion of King has been exceptional even by start-up standards. Persson expects the workforce to double within two years and says the “flat” Swedish approach has been a key factor in their rapid growth.

“Our philosophy is that it is a flat organization where everybody is close to the decision makers. The individual has a big say in what is going on.”

English was recently made the official working language of the Malmö office after an influx of international staff.

“In the States there is a very hierarchical mentality in companies and there is an expectation for people to work long unsocial hours,” she says.

“That doesn’t really exist here as things are modelled on a flat approach which works better to ensure you don’t burn out.”

“Being in Sweden has its advantages and I think I’ll be here for a long time. The only thing I miss about California is the weather!” laughs Williams.

Developer Alexandru Andronache is another foreign import having recently moved from his native Bucharest for Malmö to work for King.

“It was an easy decision to come here as this company is going places and I wanted to be a part of that,” he tells The Local.

Maintaining the work/life balance for their staff is something that King prides itself on. Persson adds that nobody works longer than their required eight hours.

“But we expect high quality output during your shift,” he says.

“A lot of us in key positions have families and we’ve all done the work day and night approach of the past. The approach here is different, it’s more relaxed where you are in the zone when you work but can then go home and not take the job with you.”

“Compared to say an American or British company, we don’t raise up individuals but instead it is the team that is celebrated,” Sebring says.

“It’s a fast paced environment and at times a bit chaotic but it works.”