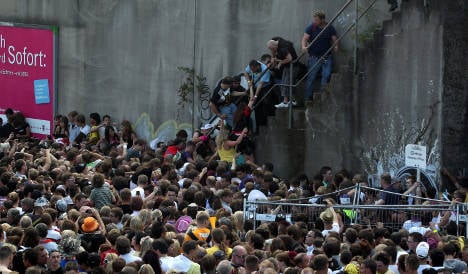 “First there’s a jam and then the pushing and shoving starts,” said project leader Professor Armin Seyfried, who together with his team wants to find out exactly how much space is needed by a crowd to prevent dangerous situations arising.

If the team can find exact limits on the safe number of people per square metre, said Seyfried, this can be passed on to event planners and security forces so they can ensure enough space for expected numbers of visitors.

Such a limit would help avoid scenarios such as that in the 2010 Love Parade festival when a crowd got stuck in a bottleneck which served as both entrance and exit, resulting in a stampede in which 21 were killed and hundreds injured.

Seyfried’s experiment simulates those kind of conditions by using large plastic rectangles to mark out an intersection in the middle of an exhibition hall. From all four sides groups of people walk towards the intersection at the same time, cross over and exit at the opposite side.

The volunteers wear white hats marked with codes so that the 24 cameras around the hall can closely track their movements down to the nearest centimetre.

The whole thing is then repeated with wider entrances and more people.

Three hundred and fifty people kicked off the large-scale experiment on Wednesday in Düsseldorf. Over several days the number of participants was set to swell to around 1,000 at a time.

“Before it can get dangerous there will be a stop signal,” Seyfried told volunteers over the microphone, then blew into his whistle. “When I blow the whistle, everyone stand still.”

A later experiment will look at how much space is needed when there is traffic going in two directions, a factor which can often lead to the kind of chaos seen in the Love Parade, where two colliding streams of people wanted to get in and out over the same ramp.

In situations like that scientists believe that crowds could come to a complete standstill even with just 3.5 to 4 people per square metre. At the Love Parade the crowd density was much higher.

“We took measurements from photos of the [scene at the] Love Parade and found that there were seven to eight people per square metre,“ said Seyfried.