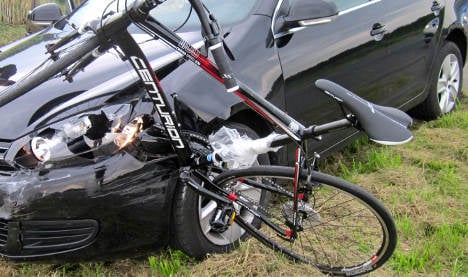 The Higher Regional Court of Schleswig Holstein state ruled that although there was no law to force cyclists to wear helmets, they so obviously offered protection against injury that all reasonably minded people would do so.

Helmets were also affordable, so there was no reason not to wear one, the court said.

The ruling came after a woman sued the driver of a car for damages following an accident. She had been riding past the car on her way to work when the door was opened, and she smashed into it, banging her head on the ground as she fell.

She suffered serious head injuries which kept her in hospital for two months, and needed further treatment afterwards. She asked the court to rule on the car owner’s fault in the incident, so she could pursue her for damages.

But the judge ruled that the injuries she suffered were 20 percent the fault of the cyclist for not wearing a helmet. She said a helmet would not have prevented the accident but that the cyclist had failed to take reasonable measures to protect herself because she was not wearing one.

“Cyclists these days are exposed to a particular risk of injury in daily traffic. The traffic these days is particularly tight, with motorized vehicles dominating and cyclists often only seen by drivers as hindering the free flow of traffic,” the judge’s verdict read.

She said there was no serious doubt that helmets were effective protection against head injury and that they were affordable – meaning that any reasonable person would buy and wear one.