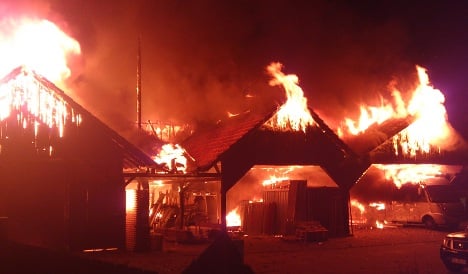 “Yes, people are talking about it again,” Peter Ott, head of the Klingenberg fire brigade told The Local on Thursday.

He led the operation to fight the fire at the sawmill owned by the Michel family – whose daughter Annelise died during an exorcism back in 1976, something which has cast a cloud over the town located some 60 kilometres south-east of Frankfurt ever since.

Her distraught parents erected a chapel in her honour – and this, as well as her nearby grave, has over the years become a place of pilgrimage for devout Catholics.

Annelise’s story was turned into the 2005 Hollywood film The Exorcism of Emily Rose starring Laura Linney and Jennifer Carpenter. German filmmaker Hans-Christian Schmid also made a film about the case called Requiem.

Annelise’s deeply religious parents brought priests to help her fits which doctors said were most likely due to epilepsy.

The archbishop of Würzburg gave them official permission to conduct an exorcism – a very rare occurrence. By the time she died, she weighed just 31 kilos. She was 23 years old.

Now the regional criminal police are investigating whether the fire at the sawmill was started deliberately, said fire chief Ott. It still belongs to the Michel family, and is managed by Annelise’s sister.

“It was a huge fire,” he said of the blaze which started in the early hours of June 6.

“We were called there at 42 minutes past midnight, and we were still there at 7pm the following morning. We had to get a digger in to tear down parts of the sawmill so we could reach different parts of the fire. The house next door was also badly damaged.”

He added that a car trailer parked outside the wreckage of the sawmill was set on fire on Wednesday night.

Both Michel parents are already dead, and the tz newspaper reported that the house has been standing empty since then, with some locals claiming to have seen spooky apparitions in the shadows there.

The paper even noted that the date of the fire – the 6th day of the 6th month – could be made into the devil’s number if the digits of 2013 were added together to make six.

“Of course, much is being speculated – that the fire is to do with the Michel family. But I don’t think there is a connection,” said Ott.