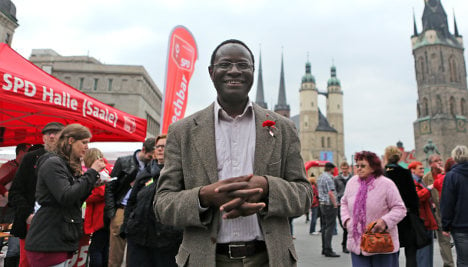 Diaby is campaigning under the slogan “Diversity Creates Values” for a seat in the German parliament which, if successful, would make him the country’s first lawmaker of African origin.

Many miles away from his birthplace in Senegal, the 51-year-old with a PhD in geo-ecology has made his home in Halle, a city in formerly communist East Germany, and now wants to represent it at the federal level.

“I am Senegalese, it’s true, but firstly I am German,” Diaby told news agency AFP in an interview.

Third on the Social Democratic Party’s (SPD) list of candidates for the region of Saxony-Anhalt, his chances of winning the hotly-contested seat for Halle in Germany’s Bundestag lower house of parliament are seen by his party as good.

German voters go to the polls on September 22 when the centre-left Social Democrats will seek to unseat conservative Angela Merkel at the Chancellery after two terms at the helm of Europe’s top economy.

Halle, with its 230,000-strong population, is grappling with an unemployment rate that, at 13 percent, is twice the national average. It is also viewed as a hotbed of far-right extremism.

The married father-of-two took German nationality 12 years ago after finding himself “by chance” in East Germany in 1985 as a student, having won a coveted scholarship to learn German and study chemistry in Leipzig.

One of his first political victories came when the detested Berlin Wall fell in November 1989.

Then, as the spokesman for foreign students at his university, he pushed for the situation of exchange students facing deportation with the disappearance of East Germany to be shored up.

Well before joining the Social Democrats in 2008, Diaby, who previously was also a spokesman for striking students in Dakar, says he had always “made justice the fight of his life”.

“I would like to be judged on my competence and my experience rather than on the colour of my skin,” he said, describing his political journey as a “progression”.

Though he was physically attacked in 1991 because of his origins, Diaby, who is also a former president of the Federal Council of Immigrants, believes that today xenophobia no longer poses as big a problem in Germany as 20 years ago.

“East Germany has changed a lot,” he said.

Nevertheless the far-right National Democratic Party of Germany has lawmakers in the eastern state assemblies of Saxony and Mecklenburg-Western Pomerania, and has secured a seat on Halle’s city council.

Rüdiger Fikentscher, former head of the SPD’s regional federation, said he recalled being won over by Diaby’s experience which, he said, had always surmounted challenges “with flying colours”.

“He has all the requisite qualities. He is kind, very intelligent, grasps things very quickly and above all, he’s not looking to stand out,” he said.

Diaby always walks around his home turf and is a well-known face locally.

“People stop me on every street corner and tell me their stories,” he said. “That’s part of my work.”

His personable manner lends itself to campaigning as the Social Democrats gear up to try to win back the seat from the socialist The Left party which triumphantly took it in elections four years ago.

“Karamba’s great strength is his easy contact with people,” Thomas Stimpel, one of his campaign officials, said. “You put him in a room with people and 10 minutes later he knows everyone.”