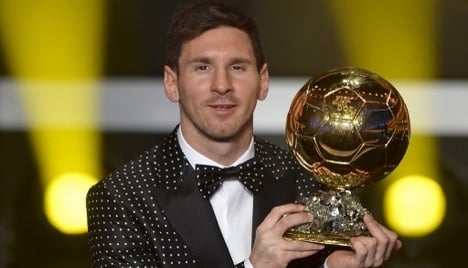 Messi posing with the Ballon d'Or in Zurich in January. Photo: Fabrice Coffrini/AFP

Argentina and FC Barcelona forward Lionel Messi, 25, is accused along with his father of filing fraudulent tax returns between 2007 and 2009.

According to the charges, Messi and his father Jorge used companies in Belize and Uruguay, with branches in Switzerland and England, to evade paying taxes.

Messi was named the world’s football player of the year by Zurich-based FIFA in January for the fourth year in a row after scoring 91 goals in 2012.

The superstar issued a statement through his Facebook page, saying he was surprised by the reports.

“We have just learned through the media that the Spanish special prosecutor for economic crimes has made a complaint petition,” the statement said.

“We are surprised by this news because we have never violated a law,” the stament continued.

“We always fulfilled our tax obligations and followed the advice of our tax advisers. They will clarify the situation.”

The captain of the Argentina national team is reported to have signed a contract for 11 million euros a year with FC Barcelona, not including incentives.

The news of the charges comes amid a global crackdown on tax evasion driven by authorities in the US and the European Union.