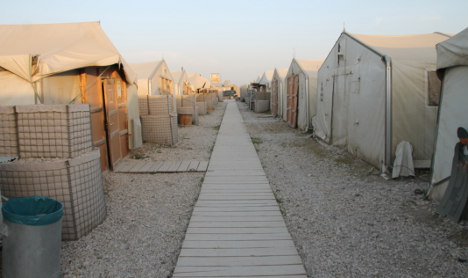 According to a report published in Der Spiegel on Saturday, the group have said they will set up a tent city outside the entrance to the German camp in the Kunduz Province in northern Afghanistan, if their concerns are not addressed.

A spokesman for the group, who fear Taliban reprisals once the German army completes its withdrawal in 2014, also suggested the workers could go on hunger strike.

The protest could affect the visit of Foreign Minister Guido Westerwelle, who is expected to arrive in Kabul on Saturday morning. His meeting with President Hamid Karzai is part of the German military withdrawal process.

The Bundeswehr employs 1,500 Afghans in the country, including translators who accompany soldiers on dangerous combat missions. They fear that radical Islamists will target them and their families once the Bundeswehr leaves Afghanistan, if they are not offered asylum.

The workers have already protested outside the camp several times, but have never resorted to blockading its entrance. According to an internal Bundeswehr paper, the commander of the 980 Germans inside the camp took note of the group’s concerns, but threatened to call in Afghan security forces to break up the protesters’ tent city if necessary.

Government sources in Germany have indicated that the workers can only be given asylum if they can prove a concrete threat on their lives. At the moment, around 30 individual cases are being considered.