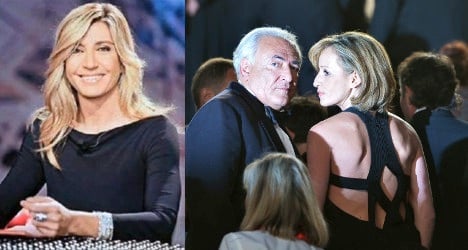 Italian journalist Myrta Merlino claims she was assaulted by Strauss-Kahn at the World Economic Forum in Davos more than a decade ago, French magazine Le Point reported on Wednesday.

Merlino, now aged 44, made the accusations in a YouTube interview with Italian journalist Klaus Davi.

She claimed Strauss-Kahn, known as DSK in France, sexually assaulted her in his swanky hotel suite on the fringes of the annual Davos event on an unspecified date in the “late 1990s”.

Merlino alleged that after luring her to his hotel suite with the promise of an interview, DSK demanded that the photographer who had been accompanying Merlino stay outside the room.

The journalist said she reluctantly agreed.

“I sat down in an armchair,” she recalled.

“He offered me a big glass of champagne, and we began talking about everything except for the interview,” said Merlino.

“Then DSK told me he adored journalists,” she said.

“I replied that his wife was a terrific woman and journalist,” she said, in reference to DSK’s then wife, French-American TV journalist Anne Sinclair, who divorced him earlier this year.

“Then I got up and, pushing me violently against the wall, he tried to kiss me,” said Merlino.

“I gave him a violent slap, I stormed off and with great difficulty, fled [from the room]” she added.

Merlino went on to say she was shocked by the assault and very angry about what she called the “psychological violence of a powerful man.”

For his part, DSK’s lawyer Richard Malka told Le Point, which first reported the story in the French media, that he was not “abreast of developments” and had no comment to make.

Strauss-Kahn, once seen as a French presidential contender, was accused of raping a chamber maid in New York City in 2011, although the criminal charge was dropped and he paid an undisclosed sume to settle a civil suit.

Merlion’s claims come after DSK made something of a return to French public life recently, making a rare and unexpected appearance at the Cannes film festival two weeks ago.

DSK, 64, was accompanied on the red carpet by his new girlfriend, the Morocco-born French marketing executive Myriam l’Aouffir, 45.

Participants at the World Economic Forum at Davos in 2020. Photo: FABRICE COFFRINI / AFP

The annual gathering of the world's political, economic and business elite traditionally takes place in January against the idyllic snowy backdrop of the Swiss Alpine village of Davos.

But it was postponed due to the Covid-19 pandemic and, charged with remodelling the world economy in the wake of the crisis, will now be held 125 kilometres (75 miles) away in the plush Burgenstock resort overlooking Lake Lucerne.

“The meeting will take place as long as all conditions are in place to guarantee the health and safety of participants and the host community,” WEF spokesman Adrian Monck said in a statement.

“The meeting will focus on the solutions required to address the world's most pressing challenges. “Global leaders will come together to design a common recovery path, to shape 'The Great Reset' in the post-Covid-19 era and rebuild a more cohesive and sustainable society.”

The WEF announced in June that the 51st edition of its annual meeting would take place in a hybrid format, then in August said it was being delayed for several months to reduce any risks to participants from the coronavirus pandemic.

The Lucerne summit will combine both in-person and virtual elements, with participants linked to a network of around 400 hubs worldwide to incorporate dialogue with the WEF's “young global shapers, to ensure openness and inclusion”, said Monck.

The summit will be preceded during the week of January 25 by digitally-convened high-level “Davos Dialogues”, when global leaders will share their views on the state of the world in 2021.

The novel coronavirus has killed more than 1.04 million people while at least 35.5 million infections have been recorded since the outbreak emerged in China late last year, according to a tally from official sources compiled by AFP.

The pandemic has also triggered a global economic downturn, though the International Monetary Fund said Tuesday that while it is far from over, it will not be as bad as originally feared thanks to a flood of government spending.

The World Trade Organization said likewise, forecasting a global trade contraction of 9.2 percent this year, rather than its previous “optimistic scenario” prediction of 12.9 percent.

But global trade will then grow by only 7.2 percent next year, rather than the previous 21.3-percent estimate issued in April, the WTO added.

The WEF announcement comes as Switzerland announced Wednesday that daily coronavirus cases had jumped over the 1,000-mark for the first time since April 1, when the peak of the pandemic's initial wave began to recede.

Swiss Health Minister Alain Berset has urged the country to “get a grip” and be more rigorous in applying the basic measures to control the spread of the virus.

The 2020 edition of the WEF summit, hosted in January just as the world was beginning to become aware of the new coronavirus spreading in China, drew more than 50 heads of state and government to Davos.

It focused on themes of sustainability and finding a more inclusive model for capitalism. US President Donald Trump and Swedish teenage eco-warrior Greta Thunberg were among its top speakers.