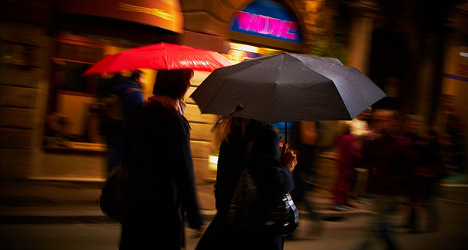 Spain’s temperatures dropped by 1.2 degrees compared to the average 15.9 for this time of year.

“Whereas in the south of the country temperatures have been normal, in the north of Spain it’s been three degrees colder this month,” meteorologist Alejandro Lomas told national daily ABC.

Even the Pyrenees are still covered in snow, making it possible for ski resorts to remain open later than ever.

Lomas told ABC this was due to the fact that March’s heavy snowfalls had not yet thawed as a result of the drop in temperatures in the mountain range along the French-Spanish border.

Spain’s State Meteorological Agency AEMET has given little importance to France’s Meteo predictions that this would be the coldest summer in Western Europe in 200 years.

“Our web doesn’t show anomalies for the summer, although it’s only a model,” said Lomas, spokesperson for AEMET.

“Spanish summers are unlikely to be cold.”

Lomas forecasts that this weekend’s weather will bring showers to the north of Spain but that overall temperatures will rise slightly.

Keep your umbrellas handy for next week as the meteorologist has predicted there will be stormy weather despite temperatures going up across the mainland.

In related news, local daily El Correo de Galicia has announced that the city of Santiago de Compostela, famous for being the end point of the Christian pilgrimage known as El Camino de Santiago, is the second rainiest city in Europe (1,900 litres per square metre) after Norway’s Bergen.