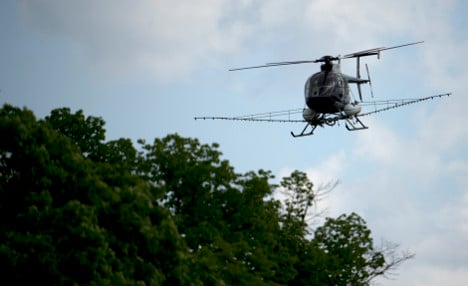 A helicopter had been spraying the toxic chemicals over the town of Dorsten in north-western Germany as part of the district’s yearly fight against a plague of oak processionary moths, whose hairy caterpillars are poisonous to people.

Unfortunately, the helicopter flew low over a primary school and dumped the insecticide over the playground just as the 220 school children were outside having a break from their studies.

The children were quickly taken into the school sports hall to be given showers and first aid. At least 15 children were taken to hospital suffering from eye and skin inflammations, said a fire brigade spokesman on Friday.

Town authorities had warned the population not to go outside during the helicopter flights, but had delayed the action at the last minute from Thursday to Friday due to weather conditions.

It was unclear whether the children were suffering from the affects of the chemicals or from the hairs of the caterpillars which could have been disturbed by the helicopter flight.

Oak processionary moths build nests which can measure up to a metre across and can contain many thousands of individual caterpillars. The fine hairs which cover their bodies can provoke severe irritations such as itchy rashes or conjunctivitis and even respiratory problems such as asthma or even anaphylaxis if inhaled.

Police said that the insecticide itself did not pose a serious danger to human health, but could certainly lead to inflammations. A spokesman said police would now investigate on suspicion of grievous bodily harm due to negligence.