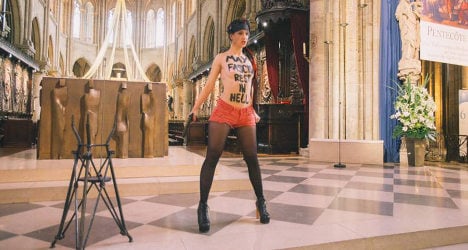 A militant from the feminist group Femen, renowned for their topless protests, forced the evacuation of Notre Dame cathedral on Wednesday when she walked up to the alter, pulled out a plastic gun and pretended to shoot herself.

The activist, who had the words “may fascists rest in hell” scrawled on her naked chest was mocking the suicide of far right historian Dominique Venner, who had taken his own life in front of the same altar on Tuesday.

Around 1,500 visitors were in the cathedral at the time of Venner’s suicide. The writer took his life shortly after posting a blog entry in which he blasted France’s gay marriage law and immigration.

The Femen activist, named Marguerite, was arrested and taken away by police to shouts of “shame” from the some of the visitors inside the church, France’s TF1 reported.

The stunt only lasted a matter of minutes but pictures of the deed soon appeared on Femen’s Facebook page.

“Just right now Femen's angel of Death held a mono-protest on the altar of the Cathedral of Notre Dame in the same place as yesterday's suicide of a fascist activist,” read the post.

Leader of Femen Inna Schevchenko said the act was a protest against all those who paid their respects to “the extreme right militant” and named the leader of France’s National Front Marine Le Pen.

Following Venner’s suicide Le Pen sent out a tweet in which she said she “respected” Venner and claimed his suicide was a “political act”.

Later on Tuesday night about a hundred far-right sympathizers gathered in the square in front of the cathedral to pay tribute to Venner.

It is the second time in little over a week that Femen have risked the ire of the extreme right. Earlier this month they disrupted a march by far right sympathizers in Paris when four bare-chested women unfurled a banner on a balcony high above the rally which read “Sextermination for Nazism”.

Before killing himself Venner left a message, which was read out by a friend after his death on the conservative station Radio Courtoisie, as well as his final blog post.

They denounced both the recently passed law legalizing gay marriage and immigration from Africa.

"I believe it is necessary to sacrifice myself to break with the lethargy that is overwhelming us," he said in the message read out on the radio.

"I am killing myself to awaken slumbering consciences."

Earlier on Thursday the leader of France's anti-gay marriage movement Frigide Barjot distanced herself from Venner.

"This man was part of the group called Printemps Francais (French Spring) which has nothing to do with us and which we have strongly criticized in the past."