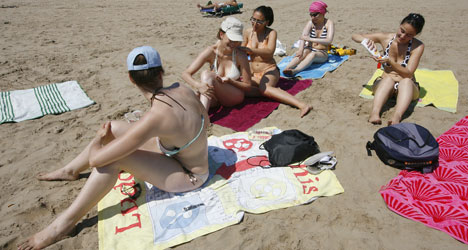 Officials from the melanoma unit of Hospital Clinic in Barcelona said on Sunday that cases of the aggressive and deadly form of skin cancer are increasing in Spain.

The number of people affected in Catalonia has risen by 50% in the last decade, with between 7 and 12 cases detected in every 100,000 people, reported local daily La Vanguardia.

Melanoma is the leading form of death from skin disease.

Half a century ago it was thought to affect only sailors and farm labourers but it is now being diagnosed in people as young as 16 or 18, according to dermatologist Susana Puig who works at the Clinic.

Detectable when it reaches a thickness of 4mm or begins to bleed, melanoma is deadly in 70% of cases.

Puig added: "The only advantage we have now is that in many cases we detect it in the early stages when it can be surgically removed without the need for further treatment."

In addition to avoiding sunbathing during the hours of greatest risk from 1PM to 5PM, which is especially important for children, dermatologists recommend that people should be on the alert for any changes in their skin.

Signs that should result in a visit to the doctor include the appearance of moles or new freckles that have any of the following characteristics: irregular edges; changing colour; increasing size or roughness; lumpiness or shininess; the appearance of a small, dark lentil; bleeding or itchiness.

It is best to err on the side of caution when deciding whether or not to seek medical advice.

"Anyone who can count more than 100 freckles on their body should see a doctor," advised the dermatologist, "even if they don't change colour or size."

"The specialist should review the whole body during the consultation," she stressed, "though this isn't always done."

Puig added that checkups should include even those parts of the body that are not usually exposed to the sun, such as between the fingers and the scalp.

Many adult melanomas are the result of exposure to the sun during childhood or adolescence. Doctors warn that children under 7 years old should not be exposed to the sun during the hottest hours of the day, even if they are wearing sunscreen and a shirt, as their bodies are more susceptible to rapid and severe sunburn than those of adults.

The Spanish Agency for Medicines and Health Products (AEMPS) and the Ministry of Health, requested on Tuesday the voluntary withdrawal of 14 sun creams because the sun protection factor (SPF) that they advertise does not correspond to the labelling.

The results were discovered during a recent trial AEMPS carried out to guarantee that the sun protection factor is the one announced by the manufacturers. The trials focused on sunscreens with SPF 50 or SPF 50+, especially those with very light creams, mists and sprays. The agency chose 19 products from companies in different countries, of different sizes and price points.

Only five of the 19 creams analysed provided protection that was consistent with its labelling.

Five of the sun creams had an SPF much lower than that indicated on their labels, always below an SPF factor of 29.9. These are:

Nine of the sunscreens were found to have an SPF of between 30 and 49.9, instead of the advertised 50. These were:

No incidents of sunburn related to any of these products have been reported, however the Ministry of Consumption has started to investigate possible illicit advertising and unfair practices, and where appropriate, will sanction the manufacturers.

According to Weather Online, the UV Index in Spain and other Mediterranean countries is a lot higher than in northern European countries. Indices of 9 and 10 are common, whereas, in the UK, the UV Index rarely exceeds 8.

If you’re looking for extra protection this summer, a new app, UV-Derma has been released by professors from the University of Malaga, which calculates how long you can stay in the sun before burning.