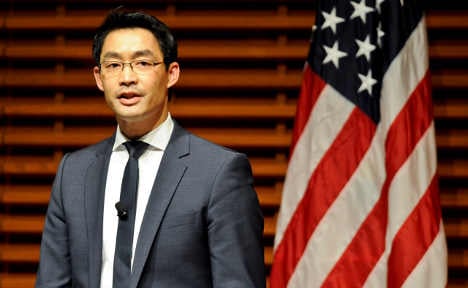 Rösler made the comments late Tuesday while visiting Stanford University in California as part of an official trip to Silicon Valley. He told students Germany was particularly keen to recruit highly-qualified IT professionals and that it wanted to establish Berlin as a start-up hub to match London and Tel Aviv.

He described Germany as one of the strongest economies in the world, adding “What we need now is a stronger IT scene in our country.”

But Rösler admitted Germany must do more to create a “welcoming culture” to attract the world’s best and brightest, including extending dual citizenship beyond residents of the European Union.

He said his goal was for the annual number of tech start-ups in the country to double, hitting 18,000 by 2020.

Rösler also visited internet and computer giants Google, Facebook and Apple. He is due in Washington DC on Thursday for talks on free trade agreements between the US and Europe. A meeting with chairman of the Federal Reserve, Ben Bernanke, is also on the agenda.

Rösler last visited California in February of this year, when he paid another visit to Silicon Valley.