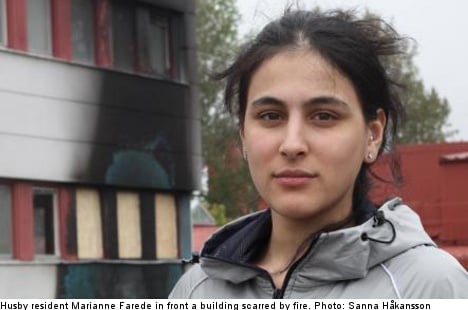 Stockholm’s Husby by day proved a different story from the past few nights. While the damage was still visible – broken windows, burnt walls, and scorched car parks – the people were calm as locals carried on with business as usual.

Police officers were on hand in the central square to provide information and support for residents.

“Many people are unhappy with the situation they’re living in. I understand it, of course, but it’s no excuse, you can’t destroy your neighbours’ property.”

IN PICTURES: See the damage from the Husby fires

She added that some officers have been afraid during the attacks, which have erupted every night for the last three days, fearing they might not return home.

“We do our best, but we are people too. But when people get injured because others are throwing rocks, I don’t think it’s acceptable,” she said, adding that many Husby residents were happy to have a constant police presence.

A pizza shop owner, who preferred to remain anonymous, had kept the stones that had been hurled through his restaurant’s front windows, all of which were still damaged.

“No customers have come since the windows were smashed,” he said, gesturing to the empty tables.

“I mean, I wouldn’t come here either, you know? But what’s happened has happened, I can’t be angry about it, what’s the point?”

Others were more angered by the rioters, including 26-year-old Husby resident Marianne Farede.

“It’s idiotic. They’re ruining things for the people that live here,” she told The Local.

“We’re the ones that suffer. It’s our cars that are getting burned, it’s our money.”

Farede, who grew up in Södertälje south of Stockholm and moved to Husby five years ago, agreed that this week’s disturbances likely erupted as a result of the fatal shooting of a 69-year-old man by police last week.

However, she believes the young people involved are using the incident as an excuse to cause trouble.

“They’re just waiting for the smallest reason to take their frustration out on the police,” she said.

“I don’t know why they think police are their enemies? They aren’t their enemies. They’re doing their best to protect us.”

IN PICTURES: See what people in Husby told The Local about the riots

She feared the unrest of recent days would further damage the area’s reputation.

“It’s a real shame that this has happened. We already have a bad reputation. People think, ‘Husby, ooohhh, scary!’ This just makes things worse.”

While Farede agreed that high youth unemployment was part of the problem, she put more blame on parents rather than a lack of support programmes from the Swedish state.

“It’s how they’ve been raised. Everything comes back to their parents,” she explained. “It’s not the state’s fault. You have to take control of your life, you can’t just go out and ruin things for everyone else. That’s doesn’t help anything.”

She also thought the young people of Husby and surrounding districts seem to have failed to realize how good they have it.

“If I lived in my homeland, I wouldn’t have it as good as I do now. That’s something I really appreciate,” the Lebanon-born Farede explained.

“There aren’t enough who do appreciate what they have. They want even more. You don’t have to feel like a Swede to adjust to Swedish society.”

Shahnaz Darabi, who runs a flower shop on Husby’s main square, also attributed the recent violence to a group of disgruntled youths with too much time on their hands.

“It’s just a bunch of young people who have no jobs and nothing to do. They think it’s fun,” she said.

Darabi, a native of Iran who has lived in Sweden for 19 years, also cited a lack of involvement by parents as a contributing factor to the riots.

“Parents are ultimately responsible. They need to set boundaries. They need to have more of a check on their children’s lives,” she said.

However, a disconnect between families and schools, as well as different views of how to raise children, complicates matters, according to Darabi.

“There is a something of a culture clash,” she said.

“If parents try to discipline their children, the kids complain in school, and say their parents have done this or that, and then [social services] steps in and tries to take the children away. Parents are scared they’ll have their children taken from them.”

The transition to life in Sweden is hardest for those who come to Sweden as young children, she added.

Darabi believes that too many immigrant parents fail to integrate into Swedish society, thus making it harder for their children.

“Many sit at home and watch television from their home countries, don’t learn the Swedish language, they are out of work and living on benefits and can’t move forward. They are stuck,” she said.

“It’s the individual and parents who need to take responsibility. But many don’t; they only think about money and how to get benefits this month and next month. That affects their children. There has to be a limit. The state has given them too much, frankly.”

Olav Kvitastein, meanwhile, a Norwegian who lives just 200 metres from where the riots took place, claimed the area is usually pleasant.

“It’s usually a quiet neighbourhood, the problems are more hidden, drugs or unemployment for example. Kids are usually playing outside after dark, alone. There’s really no kind of trouble or violence,” he told The Local.

“Most of the people here are Muslims, and very quiet, there are no parties, no alcohol.”

Malin Önsten, a Swede from near Malmö, believed the attacks were a reaction to police officials’ attitude.

“The police have a particular attitude to people here and the residents react to it. But I don’t think the kids really understand the problems, or reflect on what they’re doing. They just want to make trouble, they don’t understand the politics,” she said.

A 49-year-old Bosnian immigrant who lives near Husby was also unimpressed by some of the police work, but more so by the actions of the rioters.

“I try to understand this, but I can’t. It’s hard to fathom. Sweden is far from being a racist country, in fact it’s an incredible country to live in, but on the other hand I have white skin and blue eyes,” he told The Local.

“I’m not saying I’m lucky – I am who I am – but there are a lot of people who get annoyed that they’re not getting the same chances, or that the same resources aren’t being put into areas such as this.”

Many residents feared the rioting showed no signs of stopping, but police on hand explained that authorities were ready for the worst.

Throughout the day on Wednesday, police officers conducted outreach with parents and community organizations to encourage them to mobilize in a show of solidarity to show that local residents don’t condone the violence which has plagued the area in recent days.

“This is the best we can do, to have civil society stand up and show that this is unacceptable,” police spokesman Jörgen Karlsson told the TT news agency.

“That is much more powerful than having police or politicians talk about how things should be.”

But as dusk began to fall over Stockholm on Wednesday night, it remained far from clear whether or not the residents of Husby and other areas affected by unrest in recent days could expect a peaceful night.