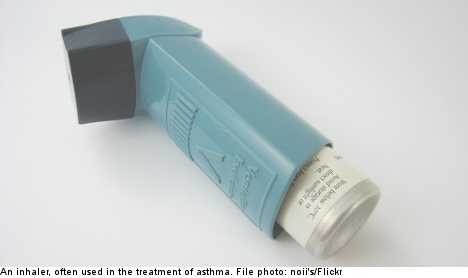 The report found that just six percent of Swedish four-year-olds were diagnosed with asthma ten years ago, but that by 2011 this figure had risen to 9.5 percent.

It was a similar story among 12-year-olds, where the figure rose from 6.4 percent to almost 9 percent in 2011.

Asthma is now the most common chronic illness among children in Sweden, a fact that the report puts down to an increase in passive smoking and air pollution in children’s living environment.

The group of children with the highest increase of asthma sufferers consisted of children of parents with low levels of education, where forty percent of the children have at least one parent who smokes.

Of the children with asthma, 40 percent responded to having discomfort when exposed to tobacco smoke, compared to just 22 percent of those without asthma.

The group of 12-year-olds also saw an increase in the number of diagnosed allergies, with 13 percent of the group suffering some kind of allergy, and 7.8 percent suffering from food allergies. In 2003, the figure was just 9 percent and 5 percent respectively.

Allergies to pollen and animal fur were the most common among the children surveyed.

The report was carried out by The Institute of Environmental Medicine (IMM) at the Karolinska Institute at the request of Sweden’s National Health Board (Socialstyrelsen). It measured the responses from 36,000 children or their carers.