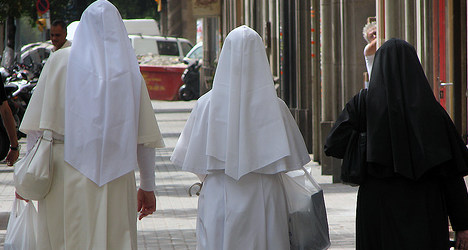 Nun more? Nearly half of all of the nuns in Spain's convents are between the ages of 65 and 84. Photo: Morgaine/Flickr

Spain's religious institutions housed 18,487 people in 2011, or fewer than half the 41,137 people who lived in this manner in 2001, figures released by Spain's national statistics institute on Wednesday reveal.

Commenting on these figures, Spain's El País newspaper said that the number of people taking up a religious vocation had dropped 30 percent since 1990.

But the daily also stressed that new movements and conservation groups like Opus Dei weren't seeing the same level of decline.

The daily also noted that Spanish people are now registering much lower levels of religious belief than ever before.

In 1978, 90 percent of Spaniards said they were practicing Catholics. By 2004, however, only 28.4 percent of people in Spain said this was the case.

In 2010, while 70.8 percent of Spanish people said they were Catholic, more than half of these people said they only went to church for weddings, baptisms, communions and funerals, reported El País, citing figures from the research institute CIS.