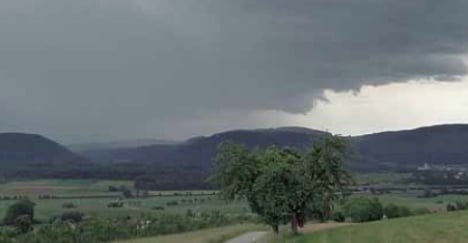 The canton of Lucerne was the worst hit by hail with car owners reporting damage mounting into several million francs, the ATS news agency reported.

Areas around the cantons of Zug and Zurich were also hard hit, the agency said.

It expects to deal with a total of 2,000 cases of hail damage when all claims are received.

The coop told ATS it expects to receive 200 claims for damage estimated at 500,000 francs.

The storm brought heavy rain to areas around Lake Geneva, the Vaud Alps, Fribourg and Bern, causing flooding in some communities.

Villages in the Lavaux wine region, east of Lausanne in the canton of Vaud, were particularly hard hit.

Water flooded streets in Cully, Grandvaux and Riex, according to media reports while the intense rain brought traffic on the A-9 motorway east of Lausanne to a crawl. 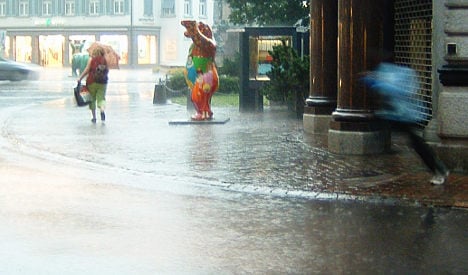 The cantons of Schwyz, Glaris, Zug and Saint Gallen were the hardest hit, with some areas receiving more rain in the last two days than the average for all of October, the ATS news service reported.

The most precipitation was recorded in Amden-Arvenbüel in the canton of Saint Gallen where 126 litres of rain per square metre of ground fell, Meteomedia said on Wednesday.

Streams overflowed their banks, basements flooded and rocks and mud slid down slopes.

Schwyz cantonal police said they received 20 calls for help over flooding in homes and roads made impassable.

A landslide cut off a highway in Siebnen, a community in the canton of Schwyz.

Members of the fire department in Zug responded to 30 cases of flooded buildings and roads.

A video posted on the 20 Minutes website showed a road in Ettingen, in the canton of Basel country, transformed into a river of muddy water.

The rain tapered off in most parts of Switzerland on Tuesday at around 9.30 pm.

But MeteoSwiss, the national weather office, said mild and wet conditions would continue through Wednesday with a break on Thursday before more rain is expected to pelt the country on Friday.

Meanwhile, high water levels in the River Rhine have forced authorities to suspend shipping of cargo along a  20-kilometre stretch.

Transport by barges between Basel and Kembs is off limits until further notice, the Port of Switzerland announced on Wednesday.