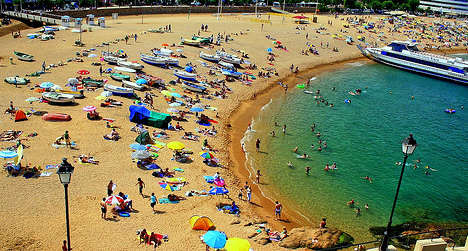 Germans are a lot less positive about people in Spain than they were twenty years ago. Photo: Andrew E. Larsen

These are the findings of a new poll on "Brand Spain" run by Spain's Real Instituto Elcano.

The influential think tank interviewed people in Germany, France, the UK, Mexico, Russia and China to gauge the international mood on all things Spanish.

Their results show just how much Spain's image among the Germans has suffered in the last two decades.

In 1996, during the days of the so-called 'Spanish miracle', only ten percent of Germans mistrusted the Spanish. But this figure now stands at 50 percent.

Germans are also now much more likely to call the Spaniards lazy.

Back in the mid-1990s, two out of every ten German thought Spaniards didn't work much. Now that figure has doubled so that four out of ten Germans believe Spaniards to be lazy.

Similarly, in 1996, 80 percent of Germans described Spain as a strong country.

The latest research by the Real Instituto Elcano shows, however, that 44 percent of Germans now think Spain is a weak nation.

The study also found that Germans tend to consider Spain a traditional country, although the percentage who think so slipped from 85 percent to 77 percent from 1996 to 2013.

It's not a lost cause for Spain, though. On a scale of one to ten, the Germans still hand Spain a 6.1.

French people rated Spain the most highly in the study, giving the country 6.4 out of 10 while Chinese people only scored Spain at 4.5.

The Chinese, however, were much less likely than other nationalities to think Spaniards were corrupt.

Only 20 percent of survey respondents in China thought Spain was corrupt compared to 48 percent of Germans.