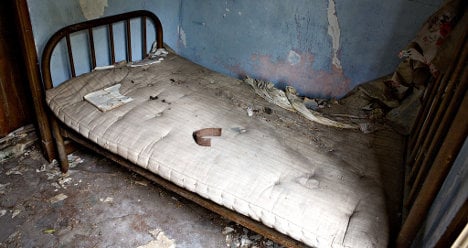 File photo, not the cellar in question. Photo: Alex Nelson

The shocking plight of the boys came to light only after the elder of the two presented himself at a police station in Bondy, a suburb of Paris and told officers “my father has been beating my little brother,” Europe 1 radio reported.

When investigators arrived at the home, what they discovered was horrifying.

For at least three years, the 12-year-old boy and his ten-year-old brother had been forced to share a filthy mattress, without water, electricity or a toilet, in a locked, windowless cellar at an apartment in Seine-Saint-Denis, in the suburbs of Paris.

On Friday, the father of the two boys, a 39-year-old plumber, and their 44-year-old step-mother, who is unemployed, were charged with violence against minors, neglect, deprivation of food, and placed in custody.

In his defense, the boys’ father told investigators “they were insufferable, they broke everything,” according to a source acquainted with the case and quoted by Europe 1.

The boys were also found to have “quite significant” bruising and scratches on their bodies, according to the same source.

Without access to a toilet, or running water, the boys were forced to sleep and live amid their own excrement and other waste, and to bed down on the same filthy mattress, without even the comfort of a blanket or pillow, according to reports.

The young victims were not allowed to eat with the rest of the family, but rather given insufficient meals, which they ate in the squalid and decaying cellar, according to Europe 1.

The two children of the boys’ stepmother, however, appeared to enjoy rather different living conditions from their basement-bound stepbrothers.

One, a seven-year-old boy, has his own bedroom upstairs in the same apartment at Pavilion-sous-Bois, and attends a private school.

The other child of the woman in question is a 17-year-old boy, and a ballet student at the renowned Paris Opera, according to the source quoted by Europe 1.

The ten and 12-year-old victims have been placed in the care of social services, pending the investigation.