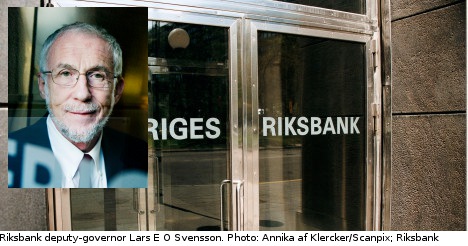 “I have failed to find support for a monetary policy that I believe would lead to better performance, with both a higher inflation rate closer to the target of two percent and a lower unemployment rate,” Svensson wrote in a statement.

Svensson has been a controversial and combative member of the Riksbank board of governors and his resignation means that the board loses its main interest rate “dove”.

His stance for lower interest rates has however been shared with fellow board member Karolina Ekholm. The pair have consistently registered reservations against the board’s interest rate policy over the past couple of years.

Svensson recently took the unusual step of publicly slamming the Riksbank’s 2012 report to the Riksdag.

“I registered a reservation against the report because I believe that it was incomplete and in many respects misleading,” he told the TT news agency at the time.

He argued that if the base rate had been left at 0.25 percent since the summer of 2010, 60,000 fewer people in Sweden would be unemployed. He also said it would have maintained the inflation target of two percent-

The majority of the Riksbank board members, lead by governor Stefan Ingves, has pushed for a higher interest rate in order to try and depress household debt – a move that has proved fruitless, Svensson argued.

“Extensive research and several studies have shown that monetary policy and interest rates have little effect on debt. It has created low inflation and high unemployment without winning anything with regards to debt,” he said.

In the summer of 2012 Svensson went one step further and in effect dismissed his colleagues on the Riksbank board as incompetent.

“Monetary policy is a complicated area. Therefore, I think it is important that those who sit on the board have a sound knowledge of macroeconomics, monetary policy and even financial stability,” he said.

“There could be more professors on the board,” he added.

Svensson’s resignation was met with surprise by some market observers.

“I’m surprised, I actually thought he wanted to stay for a further period and that he would be able to. So we are surprised and in the market there were immediate consequences, with the Swedish krona strengthening a little,” said Annika Winsth, chief economist at Nordea.

“The word is that he will be replaced by someone who is less of a dove,” she said.

Cecilia Skingsley at Swedbank meanwhile praised Svensson for his time at the Riksbank.

“His unquestioned expertise and clear line of reasoning has been important for Swedish monetary policy, so I think it is unfortunate that he is leaving. But the manner of his departure indicates that he does not accept that it (monetary policy) is a group and not an independent decision,” she said.

Among the names mooted to replace Svensson include Mats Dillén, according to a Reuters report. According to Torbjörn Isaksson at Nordea, Susanne Ackum is a possible replacement for Barbro Wickman-Parak, who is also set to leave the board.

According to the Riksbank press office, governor Stefan Ingves is on a trip and will not comment on Svensson’s departure.

In his statement, Svensson described his time at the Riksbank as “a fantastically interesting and educational time”.

“One of the best thinks of working at the Riksbank has been being in contact and cooperating with its many exceptionally knowledgeable and skilled employees,” he wrote. “It is something I am really going to miss.”

Svensson’s mandate expires on May 20th. Prior to Monday’s statement, he was expected to be re-elected for a further term.