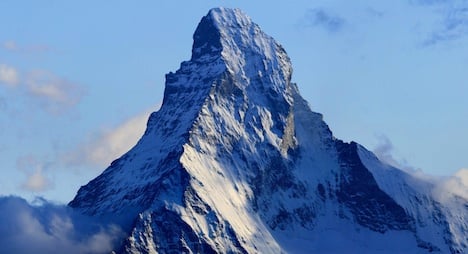 The Matterhorn — Switzerland's symbolic mountain — was the site of one of the fatal avalanches. Photo: Wkimedia Commons

The man was trekking on skis with a group of five other skiers who climbed to the summit of Trugberg Mountain (3,933 metres).

When skiing down the southwest face of the mountain as the first one down he triggered an avalanche, 200 metres below the summit, which buried him at around 9.30am, the ATS news agency reported.

The five others searched for the man and found him under 1.2 metres of snow.

Despite efforts to revive him he died on the spot.

Late on Saturday afternoon, a 33-year-old German climber lost his life on the Matterhorn, near Zermatt.

He was with two other climbers who had hiked to the Hörnli hut, at the foot of the northeastern ridge of the famous 4,478-metre peak, Valais cantonal police said.

The climbers were exploring a ridge with a view to climbing the mountain on Sunday when  a sheet of snow loosened and carried one of them 200 metres over a cliff, police said.

The climber died at the site of the accident.

The two other climbers were able to hold on with ice picks.

On Friday, an Austrian skier died from injuries sustained in an avalanche near the Günhornlücke pass, above Fiesch, ATS reported.

He was among a group of seven mountaineering skiers.

The Austrian died from his injuries in hospital, while a second person was slightly injured.

Avalanche warnings should be taken very seriously. Photo by AFP

Valais authorities said the current avalanche risk level is between 4 and 5, meaning ‘high’ to ‘extreme’.

The population is urged to stay at home. When out, they should obey the signs and especially stay away from the avalanche corridors, officials warned.

Significant amounts of snow have fallen in the area in recent days, dumping 1 metre of snow above the altitude of 2,000 metres in the upper part of the canton. Between 30 and 40 centimetres are still expected.

The highest risk of avalanches is in the Goms valley, the Zermatt valley, as well as the entire right bank of the Rhône.

Some particularly threatened areas could even be evacuated, authorities said.

People planning to go skiing in Valais over the next few days should check snow conditions and avalanche warnings in place, especially as many roads, mainly in Upper Valais, are cut off, and a number of villages in the Goms Valley, Lötschental and the Zermatt region are no longer accessible by road or train.

The Avalanche Bulletin is a good source of information not just for Valais, but for all of Switzerland’s mountain regions.

READ MORE: Is the pandemic to blame for Switzerland's spate of avalanche deaths?

Avalanches have been particularly deadly in Switzerland this winter, having claimed 14 lives so far — well above the average yearly figure of eight people.

Avalanches have caused casualties in the mountains of Valais, Vaud, Graubünden, Obwalden and Schwyz.

With many people concerned about the potential for contracting coronavirus on the slopes, the idea of skiing off piste has become more attractive.

But this practice can trigger massive avalanches, so it is crucial to stay away from unsecured slopes.