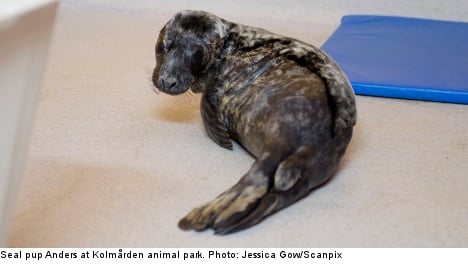 Initially, the Swedish Environmental Protection Agency (Naturvårdsverket) ruled that the two seals taken in by the Kolmården animal park in south Sweden should either be returned to the wild or put down, but Kolmården refused to comply.

“We know that we are breaking the law but we will not contribute to these pups’ death. Our own county administrative board (länsstyrelsen) has tried to take over responsibility for the case but the request was denied,” Mats Höggren, Kolmården’s chief zoologist, told the TT news agency last week.

On Monday, the agency announced it would let Kolmården’s request to keep the pups be reviewed by the county administrative board.

“That basically means a yes,” Höggren said on Monday.

“We’ve already had a good dialogue with the administrative board and they seem positive.”

The decision to allow the zoo to care for the pups’ health can be stabilized over the coming months, after which they can be fitted with GPS transmitters and released in a suitable location.

“Now we have a rather long period ahead of us during which we have to minimize their contact with humans so they don’t bond with people,” said Höggren.

One of the pups, now named Anders, was found on a bike path in Oxelösund in south-east Sweden just before Easter. The second, named Benjamin, was discovered in central Norrköping, the nearest town to Kolmården, on Easter Monday.