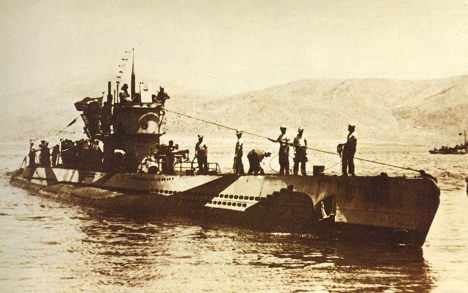 An archive picture of the same class of U-Boot. Photo: www.weltkrieg2.de

The “U-486” was torpedoed and broken in two by a British submarine in April 1945 shortly after leaving the western Norwegian town of Bergen, according to Arild Maroey Hansen of the Bergen maritime museum.

There were no survivors, as all 48 men were dragged to a watery grave.

Lying at a depth of some 250 metres (820 feet), the wreck was found when Norwegian oil company Statoil was scouting the area as a possible location to lay down an oil pipe.

“The submarine had a special coating on the hull. It was a synthetic rubber coating designed to significantly reduce its radar signal,” Maroey Hansen told Norwegian public radio NRK.

The “U-486” lies some two kilometres from the German “U-864” submarine, which was also sunk in 1945 with dozens of tonnes of mercury on board, a dangerous cargo which has caused concern for years.

Politician and experts have been examining how to best limit the environmental risks posed by the mercury, hesitating between whether to lift the wreck – it is also broken in two parts – or to cover it in a hard sarcophagus.