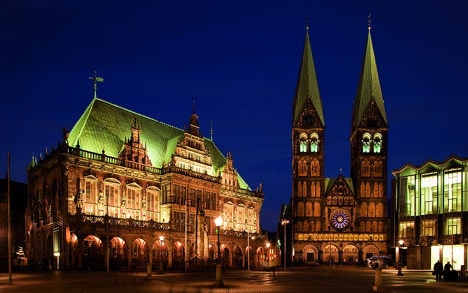 The focus of my trip to Bremen was not the famous animal Town Musicians (Stadtmusikanten), nor the splendid architecture of the Old Town, but a stretch of the Bremerhaven waterside a short train ride from the city proper.

It being early March, the promenade was windswept, but not desolate. The area is packed with things to look at, all connected with the sea and maritime travel.

It is here that a trail of museums has been built to fit the location. It could easily fill a long weekend – a room at the imposing Atlantic hotel, a tower suitably shaped like a sail, and do a museum and a walk each day.

There is the enormous Climate House, which takes visitors on a trip around the world along the eighth line of longitude, from Bremerhaven. There are sections portraying the desert of the Sahel, the Antarctic and the South Seas as well as the Swiss Alps, with each section heated or cooled to create the climate, and information about how people live there.

And there is the National German Maritime Museum, surrounded by historical boats, and boasting enormous windows through which more can be seen from the outside.

There is also the Historical Museum Bremerhaven and the Zoo at the Sea, which promises monkeys, racoons and even rabbits as well as water-based creatures.

A flood of people left from Bremerhaven

We had just one day, and picked the German Emigration Centre, in the middle of the stretch of waterside museums. It chronicles the almost continuous flood of people who have left Germany and Europe from Bremerhaven to destinations on the other side of the Atlantic.

It is a hugely atmospheric trip which takes the visitor through the experience of leaving – one climbs up stairs onto a ‘ship’ where the combination of sneaky sloping floors and film of moving waves seen out of portholes can actually induce a little sea-sickness.

A thousand old fashioned wooden drawers pull open to offer details of people who left; why they were leaving and where they went, stretching back to the 1800s and up to the present.

Sometimes in such museums, the smallest artefact can be the most affecting – such as the much-folded note on which Karl-Heinz Dietzel had a friend write the English phrase: “Please show me the right way to the Railway station. Thank you very much!”

One can imagine the now yellowing scrap of paper now fixed to the wall with tape, being clutched tightly in a nervous hand as Dietzel made his way through a new city.

People arrived in Bremen too

Bremen’s illustrious history as a trading city central has been shaped by people taking on just such challenges. That history and the riches that flowed into the city during its Hanseatic past are illustrated by the stunning and imposing buildings which make up the old city.

Migration is also clear in what is on offer for breakfast on a Sunday morning. Angolino’s café in the Viertel district has the steaming coffee machine, the generously-packed sandwiches and the flaky croissants of the kind of Italian café one imagines being a favourite in New York.

The coffee was creamy, the atmosphere noisy but relaxed, the cakes fresh and the serving staff brisk yet friendly.

Without really meaning to, one can easily be tempted by Italian cuisine for dinner too. The Atrium is a delightful deli also in the Viertel area which has a brilliant bistro in the back.

The home-made pasta is as good as it should be, and the mighty woman chef who passes through the dining area, knife tucked into her belt adds a certain frisson to the evening.

Although the Italian options are stunning, one cannot leave Bremen without eating locally caught and prepared fish. It should actually be a condition of leaving the region – no-one should be allowed to go if they haven’t eaten fish.

Having sampled the sophisticated delights of Italian cuisine in the city, the down-to-earth classic north German food on offer at the Friesenhof restaurant in the centre of town, provide a hearty contrast.

Something as simple as a baked potato and Matjes herring can take on epic proportions when properly served, and the Friesenhof, complete with dodgy pirate statue and fake fishing nets hanging from the ceiling, manages the job beautifully.

Belly full and fortified against the wind which cuts through much of the city, the next best thing to do is take a stagger around the old city – assuming one can fit down the tiny medieval passages that serve for streets in the Schnoor district.

On a Sunday, this is the spot to pick up a touristy present – or simply to have a pleasant wander, and try to count the different ways and media in which the Bremen town musicians are depicted.

But the winner for this first-timer to Bremen was das Viertel, a lively district seemingly packed with quirky shops, lovely places for coffee and lunch, and cute little houses tucked in alongside rows of mini villas. Coming from a large city, the fact that many buildings are only two or three storeys tall is surprisingly relaxing.

People took their time, were friendly, and the shops showed a diversity of interests ranging from garish football pubs via a children’s clothes shop where the garments are made from old adult clothes, to the most dedicated of organic supermarkets. Many of the houses are covered in murals, while the one large piece of graffiti on show seemed to have been the work of radical vegans – it reads tofu.

It was as I left that the Maersk containers rumbled through the train station, topping off a lovely trip and ensuring that despite the horizontal sleet, I vowed to revisit the delights of Bremen.