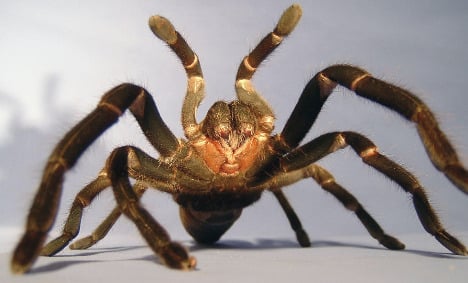 In the early 1900s Bayer employees had some pretty nifty art hanging on their office walls. CEO Carl Duisberg laid the foundation for the company’s collection when he commissioned Max Liebermann to paint his portrait in 1909. Later, staffers could decorate their spaces with works by the likes of Max Beckmann and Ernst Ludwig Kirchner. Today the stock lists iconic artists from most every movement from the last two centuries in its holdings. Get an overview of modern European and American art history this week when the show starts at Martin-Gropius-Bau.

Music from the eastern Mediterranean may conjure images of ouds, cane flutes, and tambourines. But in Turkey, Syria, Lebanon, and their neighboring Near East countries, contemporary music is alive and well. Through Sunday, composers and musicians from this culturally rich region perform at various venues around Berlin during MaerzMusik. Don’t miss Berlin-based Ensemble Adapter play the music of Turkish, Kurdish, and Jordanian composers Saturday at Radialsystem V.

An Evening With – The Plant: A Journal About Ordinary Plants and Other Greenery

You needn’t be a botanist to enjoy The Plant, a new journal full of stories, photographs, and illustrations on flora from around the world. But you should at least call yourself a “plant lover” if you go to Saturday’s event with Art Director Carol Montpart at the do you read me?! magazine store’s reading room. Each issue is devoted to a different leafy wonder, and edition four promises plenty of eloquence about the common house plant Maranta aka “prayer plant.” Go and see how our simple potted companions can inspire such sophisticated prose.

Location: do you read me?! Reading Room and Shop,  Potsdamer Strasse 98

Back in the 1920s, the European avant-garde found kindred spirits over in India. With “modernism” as a common language, these two cultures paired up at a “Society of Oriental Art” exhibition that merged works by Bauhaus artists with figures from the Indian avant-garde. See historic pieces by Paul Klee, Wassily Kandinsky, Uma Prosad Mookerjee, Shanta Devi and others at a new exhibition opening Tuesday night in Dessau.

Fifty years ago, the Elysee Treaty sealed the fate of France and Germany. Friends for life. Celebrate half a century of cross-border camaraderie at a concert of Franco-German songs Thursday. Of course the treaty was just a twinkle in Konrad Adenauer’s eye back when Hans Eisler, Kurt Weill, Bertolt Brecht, and Jacques Prévert penned the poems and tunes on the program, but it really was a golden era, and just the thing for a golden anniversary. German singer Wolfgang Pissors joins French pianist Isabelle Serrand at the Institut Francais.

Taking it to the streets is what the Lichter Film Festival is doing in Frankfurt this weekend. In a novel convergence of moving imagery and architecture, the festival ventures into the realm of urban art by projecting the works of eleven international artists on outdoor sites around the city center. Gather at Rossmarkt after sundown to take in all the cinematic action.

He started fiddling around with photography as a member of Chrysler’s camera club in the 1930s, and over the next few decades he established a career that placed him among the ranks of American photography icons. Less known in Europe, the pioneering picture man is the subject of a new retrospective opening Thursday in Hamburg. Wander among his oeuvre and see the world through one man’s sensationally surreal perspective.

A master of the monologue, British playwright Alan Bennett wrote a dozen one-character episodes for the BBC in the 1980s and 1990s. Known collectively as “Talking Heads,” the series is a true treasure of British television from the era. This week, the Hamburg-based Rover Rep Theatre is staging two of these gems – “A Bed Among the Lentils,” and “A Chip in the Sugar.” Take a seat in the audience and smile heartily at Bennett’s humour.

Relive the glamour of the golden age of Sin City when Sinatra and his pals held court at the swankiest casinos on the Strip. The talented troupe known as Swing Summit bring their finest impressions of Rat Pack heroes to Gasteig Saturday. Get dolled up and starry eyed as the crooning crew turn on the charm with hits like “The Lady is a Tramp,” “New York, New York,” and “My Way.”

Jazz in the Kallmann Museum – Trio 120

Wolfgang Fuhr, Florian Ross, and Dietmar Fuhr are making waves in the German jazz world. Their 2001 disc Aram topped MDR’s jazz CD list and with last year’s follow-up Enclosure the trio continues to champion a masterful level of improvisation. Catch a show Friday when the saxophonist, bassist, and pianist perform as part of the Kallmann Museum’s jazz concert series up in Ismaning.

Arachnophobes, stay clear of Munich this week. An exhibition opening Friday at the Museum of Man and Nature is dedicated not only to our eight-legged friends the spiders, but scorpions, and centipedes as well. Dazzlingly colourful species from exotic locales offer insight to the intricacies of their lives from within dozens of terrariums. Go and gaze at the activity. Your little creepy critter lovers will be amazed.