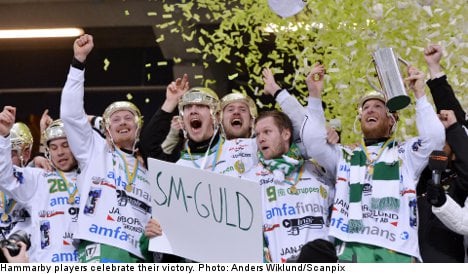 “It feels wonderful, completely awesome. We’ve fought since April to get here and have had an enormous match,” Hammarby captain Stefan Erixon told the Aftonbladet newspaper.

The Södermalm side stormed to a 3-0 lead within five minutes and had netted one more by the ten-minute mark.

From then on, it was smooth skating until Hammarby was leading 9-4 with just 30 seconds to go. The crowd then decided the game was over and stormed the ice before the referee could even blow the final whistle.

IN PICTURESClick here for to see the fans storm the ice

Not everyone was pleased with the crowd’s collective decision, not least the goalkeeper for Sandviken, Joel Othén, who found himself right in front of the Hammarby fans.

“Clearly it was no good,” he told the Expressen newspaper.

“It was completely unsafe where I was standing. It was fine because I managed to get away quite quickly, it was lucky I had my skates on.”

A record 38,474 spectators turned up to the arena in Solna, northern Stockholm – over 10,000 more supporters than the previous record at Stockholm Stadion in 1959.

Bandy, a game similar to ice-hockey but with a ball instead of a puck, a bigger rink, and more players, is a popular winter sport in Sweden.

A similar version of the sport, called “innebandy” in Swedish and floorball in English, is played indoors on hardwood and is also popular among Swedes. 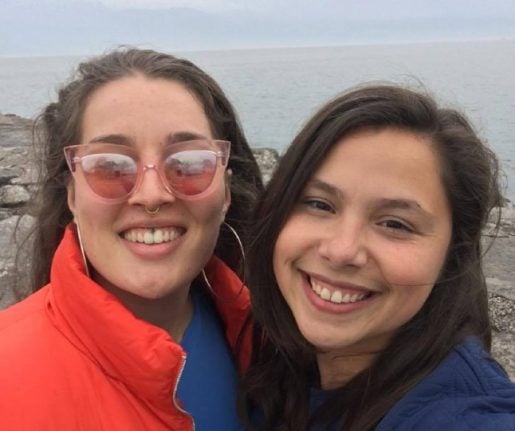 Fernanda Secca from Brazil and her Danish friend Marie Peschardt

When 32-year-old Fernanda moved to Copenhagen at the start of 2017, one of the first things she did was find a place to do pole-dancing, which had been her hobby back in São Paulo. Marie Peschardt, 29, was her teacher, and before long they soon realised they got on well.

“Coming to class a few times a week made us create a bond that was eventually taken to a personal relationship,” she remembers. “We now do everything together. We hang out several times a week. We go travelling together, we have dinner, we go to bars, we go dancing.”

The two still train together at the dance studio. “I think the friendship was possible because we were both open to meeting new people and building connections,” Fernanda says, adding that she doesn’t think Danes are particularly difficult to become friends with.

“There is no secret. Danes are not aliens. I think finding something in common that you can bond around or relate to helps in the beginning, because people are more likely to respond to that than a random request or small talk.”

“Also taking a chance, inviting a person you feel could be interesting for a coffee or a drink, can be something spontaneous or quick. Some Danes might even appreciate being spontaneous because no one here really is.”
On the other hand, it is important for those from more free-wheeling countries to understand that Danes like to plan ahead, she adds.
“Appreciate that they have their schedules and bookings weeks in advance and you might need to fit into that type of style as well if you want to build a connection.”
Marcele Rask and her Danish friends Jasmine and Carina
Marcele Rask, 36, a manager at Danske Bank specialising in financial crime and sanctions, met her Danish friends Jasmine and Carina at her previous job because they all worked in the same department. She said the three of them shared a similar appetite for adventure.
“One thing that connected us three a lot is the fact that we are all very curious and like to try new things. So we programme ‘adventure days’  where we go somewhere new, or that we like or something and spend some hours there or even the day,” she says. “It doesn’t have to be fancy, or crazy or anything, but something nice to know.”
She said they tend to do this about once or twice a month, either two of them, or all three together.
“Just after Denmark started to open from the lockdown, we went to a Gavnø slot for their tulip festival, and afterwards we went to eat MacDonald’s by the harbour.”
She says that both Jasmine and Carina are quite internationally-minded, which she feels made them more open to making friends with a foreigner.
“Jasmin lived some years abroad and was an expat herself. Carina has worked on international companies and is used to the expats’ life, having herself another great expat friend,” she says.
She said they now spoke a mixture of English and Danish together, but were speaking Danish more and more as her command of the language improved. She said she felt her own openness had helped her make Danish friends.
“I think one thing that it is very important to be as an expat is open — open for anything and everything — and not just to sit around bitching about the country, the language, the food, and everything else.”
Ashley Norval and her Danish friend Mia Garner
Ashley, 31, met Mia, 28 almost as soon as she arrived in Copenhagen a year ago from Australia and the two were paired together for a group session during her university course. They have hung out together ever since.
“I hear from her two or three times a week usually, and we do all kinds of stuff together,” she says. “We’ve travelled together, we catch up for dinner, we go to the movies, or just go to each other’s place. Sometimes we go walking or running, sometimes we just go and get an ice cream and sit in the park.” Ashley Norval (right) and Mia Garner at the Gisselfeld Klosters Forest Tower south of Copenhagen. Photo: Private
Ashley believes that many foreigners think, often mistakenly, that the Danish reluctance to impose themselves on others means they are not open to making new friends.
“I think Danish people genuinely don’t want to encroach on your personal space and territory and I’m convinced that once you kind of invite them to something and show them that it’s fine, and that you do want to see them outside of your professional space or whatever, then it’s fine.”
She said that foreigners in Denmark needed to realise that they might have to make the move, and suggest going to see a film or get a meal.
“If you make the effort to get to know any part of Danish culture, that is always well received with Danish people,” she adds, although she concedes that Danes might view Australians more favourably than people from many other countries.
Camila Witt and her Danish friend Emilie Møllenbach
Camila, 36, met Emilie over the coffee machine when they were both working for a Danish payments company, but bonded over their academic interests. “Emilie and I had a I have a very strong academic background, so we just started to talk about different theories: physics, science and this kind of thing. And we connected over that and I think that the relationship grew from that.”
They go for walks together, make chocolate together, go for dinner, or a cup of tea at a café.
“Nothing really fancy, to be fair, just being each in each other’s companies and I think that both her and I share this perspective that we like we were there for each other and not to be on our phones.”
Camila believes a lot of foreigners wrongly think that when Danes say they’re busy or booked up, that that means they aren’t open to a friendship.
“Danes require more planning. I think that something we need to understand if we come from countries where you’re used to spontaneously say ‘let’ go out tonight, let’s go out after work and just have a beer’.
“It’s really important to you know, proactively invite them and not take them saying, ‘I don’t have time this week’ as them shutting you off because in all honesty, many times they are booked. So it’s about finding that slot of time. It can happen in three weeks, but it will happen you know.”
SHOW COMMENTS
Url copied to clipboard!