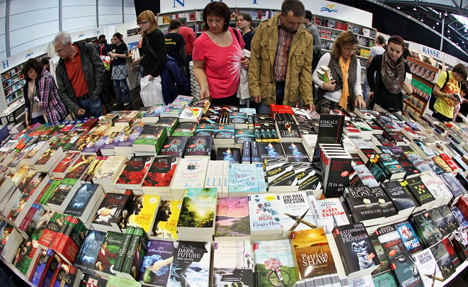 Roco wants to stay in jail. Frank wants to deliver a letter. And Sophie just wants to make the right decision. The stars of the twelve short films in the Radical Frame Film Festival’s new series are an intriguing bunch. Get better acquainted with their plights when the international movies screen in their original versions, with English subtitles this week in Berlin.

The Schaubühne stage blossoms with new theatre from around Europe this week as directors from Italy, Spain, Greece, Russia, Hungary and Iceland roll into town. Go see Frankenstein Project, Kornel Mundruczo’s contemporary take on Mary Shelley’s classic, or watch two men cook their way to a woman’s heart in Rodrigo Garcia’s Notes From the Kitchen. All plays feature English surtitles.

A depressed soul gets a second chance at life in acclaimed Japanese anime director Keiichi Hara’s 2010 film Colorful. Based on the novel by Eto Mori, the film screens Saturday with English subtitles at the Japan Foundation followed by a discussion with the filmmaker. The talk is in Japanese (with German interpretation), but even if you don’t understand a lick of the language, go shake the hand of an anime hero.

Two weeks until Easter means it’s time for the kids to break out the craft supplies. The children’s language organization Mehrsprache invites young crafters of all ages to grab some scissors and glue and make some baskets and cute little baby chicks for the spring holiday. Join the fun Sunday afternoon and then go home and dye some eggs.

“M”, pronounced “aime” as in the French word for love, is the nom de plume of Paris rocker Matthieu Chedid. You might have heard him sing with his pop Louis Chedid as a chap, or in a duet with his lady Vanessa Paradis. In the midst of a tour around Germany in support of his latest disc IL, the eccentric entertainer stops off Monday night in Cologne.

Did you know the Naked Lunch penman was also a visual artist? Burroughs cornered the market in experimental fiction back in the 1950s. Turns out, while the author was taking a break from his typewriter, he was busy making paintings, collages, films, photos, and audio recordings. Be among the wanderers at the exhibition opening Friday and see if the artwork is as controversial as his writing.

Bibliophiles from around the world will be gathering in Leipzig this weekend when books of all types pile high in the halls of the Congress Center. Go and browse the stalls, catch a reading, and meet some authors. There’s nothing like that new book smell.

Step in time to pipers and fiddlers Sunday in Munich. It’s St. Patrick’s Day! Munich’s Irish population celebrates each year with a grand parade and party. Line up along Leopoldstrasse or Ludwigsstrasse and wave to the festive marching groups like the Emerald Dancers, the Waltzing Mathildas, and the Jolly Jigs.

Location: From Münchner Freiheit to Odeonsplatz

French Week at the Bayerischen Hof

While Munich’s Irish are sporting their green this week, the city’s Francophiles are drinking wine and eating cheese over at the Bayerischen Hof. Join them Monday night when singer Sophie Wegener and pianist Andrea Hermanau kick off seven days of French music with songs from that neighboring land.

In an effort to get young performers “thinking big” about dance and theatre, acclaimed companies from the Netherlands, Belgium, France, and Germany are strutting their stuff in Munich this week. Be dazzled by new choreography from around the continent, and sign up for a workshop or two.

From romance in a border town in 1990s Yugoslavia to disillusioned dames in a German mountain town during World War II, the topics explored in this festival of German/Turkish films are fascinating. Head to Nuremberg this week where filmmakers from Germany and Turkey are showcasing new cinema at one of Europe’s most exciting film festivals.