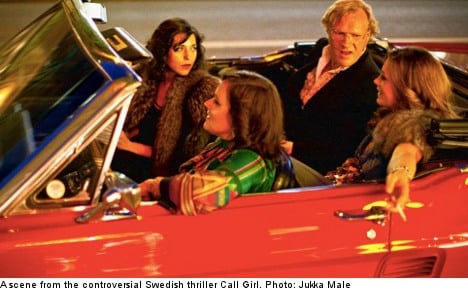 The controversial scene in the movie Call Girl, which hit cinemas in November, shows several politicians, including one similar to Palme, paying for sex with a minor at a hotel.

“A large part of the so-called hotel scene has been cut. It has been cut so that no one can be identified,” the Palme family’s lawyer Lars Viklund told the online edition of daily Dagens Nyheter (DN).

The film is based on a political scandal in the 1970s, when Dagens Nyheter claimed to have seen a secret police memo to Palme alleging that then justice minister Lennart Geijer had gone to a brothel where he had sex with an underage prostitute.

Palme denied having received the letter and the paper was fined over the story, but the memo was made public in 1991.

Palme’s family filed a complaint in December against the film accusing it of slander, but it was thrown out in January.

Director Mikael Marcimain has argued that the movie is a work of fiction and not based on reality.

It was not immediately clear why the filmmakers finally agreed to change the scene and the film’s production company, Garagefilm, was not available for comment on Wednesday.

The new, cut version will be the only one available for cinemas, DVDs and television screenings from now on, Dagens Nyheter said.

Palme was shot dead by a lone gunman on the evening of February 28, 1986, shortly after leaving a cinema in central Stockholm to walk home with his wife Lisbet.

The murder has never been solved despite hundreds of thousands of leads over two-and-a-half decades, and the investigation continues.