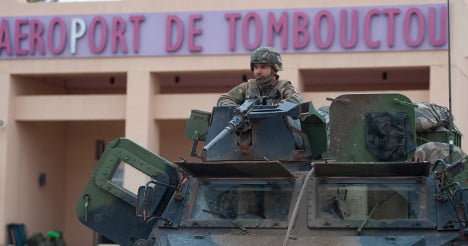 "We will move from the current framework… to a new diplomatic set-up, a peacekeeping operation which would probably be voted in April and implemented two months later," he told the National Assembly's foreign affairs committee.

On Tuesday Fabius said the UN force could comprise up to 10,000 troops.

Fabius said the operation "will be overseen by the UN and be funded by the UN, something which will obviously have a number of consequences for us".

Up until now, France has borne the brunt of the costs linked to its military involvement in Mali as well as the bulk of expenses related to Chad's 2,000-man contingent there.

The current African force AFISMA is composed of about 6,300 soldiers and is supposed to be taking over from French soldiers. Paris is due to scale back operations in Mali next month.

"French troops were not meant to stay in Mali forever", Fabius reiterated, but said that France also in the future will be present there "in one way or another".

French forces launched a surprise intervention on January 11th in a bid to stop Al Qaeda-linked fighters who had controlled northern Mali since April 2012 from moving southward and threatening the capital Bamako.

Islamist groups have largely been forced out of the main cities in the north and are now waging a guerrilla war against French, Malian and other troops seeking to help the government assert its control over the entire territory.