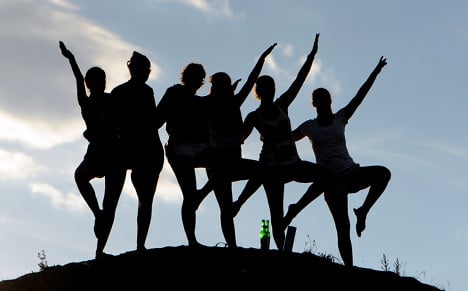 Who has the attention span to sit through a full-length play in this day and age? Theatre in ten minutes sounds more on par with the Twitter population. All kidding aside, short theatre, like the short story and the short film is an art form all its own. See five ten-minute plays in Berlin this week when English Theatre Berlin and Shakespeare im Park stage new works by multi-lingual expat playwrights like Claire Delaby and Alberto Di Gennaro.

We’re all products of our environments. Irish filmmaker Una Quigley ponders how environment affects one woman’s notion about her gender and identity in the short film The Gifted Water. Catch a showing Friday night at the Neukolln art space, Centrum where the 14-minute movie screens as part of a weekly art film series this month.

Cologne resounds with the sound of books being read aloud this week as the biggest literature festival in North Rhine-Westphalia swings through town. In addition to the German readings, there are a few in French, Dutch, Russian, and over twenty in English. Be sure to catch McSweeney’s main man Dave Eggers read from his latest novel A Hologram for the King Tuesday, and former United Nations Secretary General Kofi Annan discusses his new book Interventions: A Life in War and Peace next Saturday.

If your toddlers are like most kids their age, they probably enjoy scooting around in toy cars. So when they see the lot full of plastic jeeps, race cars, and motorcycles at IKEA this weekend there’s bound to be a few squeals of joy rippling through the brisk March air. Bring your two to seven-year-olds over to the four-wheeled extravaganza Saturday.

American architect Richard Meier designed Frankfurt’s Museum of Applied Arts in 1985. Over the years a few odds and ends were added to the structure, distracting from the original design. But all that clutter has been stripped away, leaving the stunning architectural gem gleaming gloriously in all its naked splendour. See the museum building like it was intended to look when after a three-month renovation the landmark structure shows off its birthday suit. Berlin artist Olaf Nicolai performs in the space Friday, and architects lead guided tours Sunday.

Take one Portuguese guitar, one Spanish guitar, add a pinch of bandoneon (a tango instrument that looks like an accordion), and you’ve got a lovely sound steeped in the tradition of Portuguese fado. Duo Fado Instrumental is Jan Dijker and Oliver Jaeger, a German-Dutch duo that play a program of instrumental fado music Sunday morning in Frankfurt. Have a glass of port before you head to the concert and it will be easier to convince yourself you’re actually in the Algarve.

From Persian pop singers to Sri Lankan Bollywood dancers, the performers at this festival pack a whole lot of girl power. The month-long event features a vibrant international cultural program that celebrates the diversity, creativity, and strength of women from around the world. See music, theatre, and dance performances, join in on a discussion about sexism, and learn how to make apple crumble at a cooking workshop.

Teta Moehs Reads From “Of Thee I Sing”

United States President Barack Obama likens the children of America to homegrown heroes like Georgia O’Keeffe and Jackie Robinson in his book Of Thee I Sing – A Letter To My Daughters. The point is, we’ve all got the potential to make our dreams a reality. Hear Public Affairs Officer Teta Moehs read from the story in English Wednesday and then go do something with your life, like become a famous artist or baseball player.

Joey Goebel’s “I Against Osborne”

James wears a suit to high school, he likes black and white movies and considers himself “the last gentleman.” The year is 1999 and the setting is a big high school in small town Kentucky in American author Joey Goebel’s new novel I Against Osborne. On Monday, the German actor Robert Stadlober joins Goebel in a reading at the Munich Literature House. Meet literature’s latest teen hero.

Is there a better messenger than music? Musicians are gathering at Muffathalle Saturday to deliver a message of racial and religious tolerance through song. A joint venture between musicians and football associations, the goal of the evening is to end racism, xenophobia, and anti-semitism, not only within society, but also on the football field. Set your mind free Sunday night when Nneka, Moop Mama, Nomfusi, Adriano Prestel, and Roger Rekless and Boshi San take the stage.